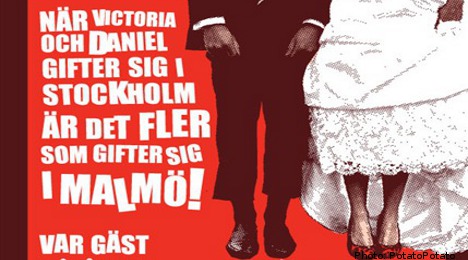 “We thought why not. We were inspired by the royal wedding and we asked ourselves – can we arrange our own wedding?” wedding planner Freja Hallberg at PotatoPotato told The Local on Friday.

The “kinda cheaper, not as good” wedding package costs 500 kronor ($60) which includes wedding clothes, wedding ring, an all-day party including paying guests, and last but by no means least – a spouse.

“In today’s society there is too much to choose from, so we make it easy for you. We offer the whole wedding package,” Hallberg said.

True to the all-inclusive theme of the special day, a divorce is thrown for good measure and all of the 20 participants signed divorce papers on registration, leaving the names to be filled in later.

Despite the formalities and the fact that the couples will only become acquainted just hours before they pledge their betrothal, Hallberg is open to the possibility that cupid’s arrow might strike.

“If there is any couple that really takes a liking to each other, they can always remarry,” she said.

The Local asked Freja Hallberg if the event could be interpreted as a critique of the excess that is typically associated with weddings.

“Yes you could say. Although we are very happy for Victoria and Daniel and that they are getting married, otherwise we would never have organized this and had the chance ourselves,” said Hallberg, who will herself be one of expectant hopefuls lining up in Malmö’s Folkets Park next Saturday.

The event has given the group cause to reflect on the prevailing norms that apply to twosome relationships and weddings, specifically over who gets to decide how a wedding should look, who are deemed suitable partners, and how long is an acceptable amount of time for a couple to have known each other before they can commit.

“There has been the odd person accusing us of wasting public resources, but we pay the same as everyone else and the criticism has led to some interesting reflection over what a wedding is for,” Hallberg told the The Local.

The mass wedding service will be held in Folkets Park at 4pm on June 19th, half an hour after the royal couple enter Stockholm’s Storkyrkan.

Each couple will be introduced at around midday and then they will proceed through several preparatory stations – costume, make up, photographing, song, poem and then choose a soloist.

“A wedding is a nothing less than a huge theatre performance,” the group exclaim in a statement advertising the event.

The ceremony will be followed by a procession through the park, a traditional waltz, and then an all-night party, before the guests, and the newlyweds, go their separate ways in the morning.