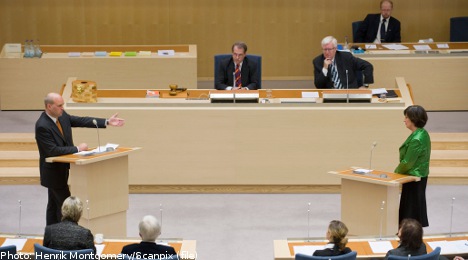 Reinfeldt received higher ratings in all five categories surveyed in a new Synovate poll of more than one thousand Swedish voters, according to the Dagens Nyheter daily, which commissioned the survey.

68 percent of Swedes consider Reinfeldt to be the best choice to represent Sweden abroad while only 18 percent backed Sahlin. In the event of a serious crisis, it is 62-20 percent in Reinfeldt’s favour against the Social Democrat leader.

With regard to who is best placed to lead the government, 60 percent of respondents backed Reinfeldt over 23 percent for Sahlin.

Furthermore the low confidence ratings for the Social Democrats are not only limited to the party leader, afflicting several other top names among the party hierarchy.

According to the Novus survey, published in the Svenska Dagbladet daily, 58 percent considered Fredrik Reinfeldt to have sound or high level of competence to manage the economy, while 28 percent thought so of Mona Sahlin.

Novus interviewed 1000 people over the internet between June 10th and 15th.