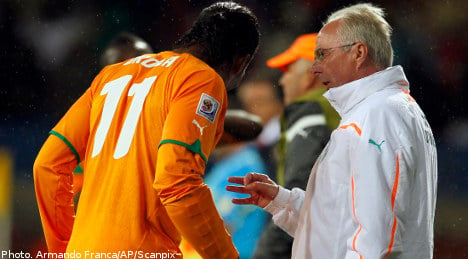 “Portugal is a good team. One point, not completely happy, but it is one point. It was a good game tactically for both teams. No one wants to lose a game like this,” the former England coach said after the game.

The Swede was however happy that Chelsea star and team captain Didier Drogba was able to play around 30 minutes of the game without any discomfort despite fracturing his arm less than two weeks ago.

“Obviously I would have hoped that we had scored a couple of goals and that he didn’t need to play. But now he has played and you can see that he is okay to play.”

Ivory Coast dominated possession for large parts of the game but rarely posed a serious threat to the Portugal goal. Drogba was set free in the box late on but was unable to get enough of his outstretched leg to the ball to steer it goalwards.

Portugal’s best chance of the game came from a snapshot from Real Madrid star Christiano Ronaldo from a full 30 metres out which hit the upright. Ronaldo was later booked for retaliation.

Ivory Coast will now look to get something out of their second game against group favourites and five time World Cup champs Brazil, with the fight for second place likely to come down to goal difference.

“We are still there. One point. Next game Brazil, let’s see what we can do,” Eriksson said.

Brazil meanwhile completed a 2-1 win over North Korea in the late game, with all the goals coming in the second half of an often turgid affair.