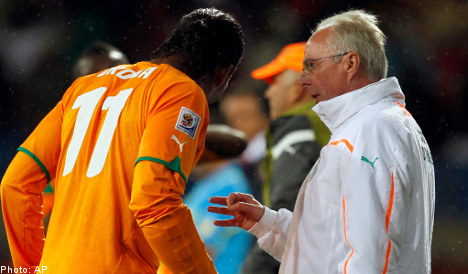 Ivory Coast captain Drogba broke his arm in a pre-World Cup friendly and his decision to wear the cast when he appeared as a second half substitute against Portugal sparked claims that the African superstar was breaking the rules.

But Eriksson, who is yet to decide whether or not the Chelsea star will start Sunday’s clash against the five-time world champions, is convinced Drogba has not received special treatment.

“It was an issue after the game against Portugal, which I didn’t understand,” said the ex-England manager.

Eriksson said he would leave a decision on Drogba until the morning of the Group H game, but expects the striker to at least play a role.

“I am not sure yet if he will play for 90 minutes, we will decide in the morning, but I think he is ready,” said the Swede.

“He has been practising well, I will speak to him and also to the doctors, but I think he is ready.”

Brazilian medical officer Jose Runco said Brazil would ask FIFA to advise them whether Drogba’s cast contained any metal components and if so, request that the protection be banned.

“We will have to have a technical meeting (with FIFA) – I am sure we will talk about this matter,” said Runco.

“If the protection is metallic then its use is not permitted. This is what we want to ascertain.”

Ivory Coast defender Siaka Tiene said it would make a huge difference to have their captain lead them against the Brazilians, but they will cope without him if he is not fit.

“We have always dreamt of meeting Brazil in the World Cup and I am delighted we will meet them, the fact we are about to meet Brazil is something which makes us happy,” he said.

“It is up to the coach to decide and I am sure if Didier took part it would reassure a lot of us. As we have seen we can play without him, but he is very important to us.”

Having only taken over as Ivory Coast manager just before the World Cup started, Eriksson said it had been a rewarding five weeks and his side’s defence at the set pieces would be key against Brazil.

“I enjoy it, I have a lot of good football players, they are listening and working hard every day,” said the Swede.

“It is a lot of work, but it is beautiful, I never had such a happy, smiling football team in my career, that is for sure.”

Eriksson added that the team is concentrating on making the most of free-kicks and corners that will come their way in the match against Brazil.

“The set pieces will be important, something like 30 percent of goals come from them, the Brazilians take them well and we all know they can finish,” he said.

“We have prepared for set pieces defensively and I hope we can surprise Brazil with something.”

Eriksson’s side, who drew 0-0 with Portugal in their opener, will face North Korea after playing Brazil.

“Our aim is to go further than the group phase, we know we have one of the hardest groups, our target is to go through, absolutely,” he said.

“A draw with Brazil is always a good result, a fantastic result is to beat them, you are playing the world’s number one side.

“It would be good to get a draw, but we are not going out there for that, we are going out to win. We hope and dream we can have a good result against Brazil, but everyone knows it will be difficult.”