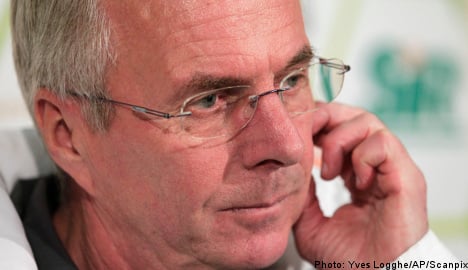 Eriksson argued that the game was decided when Brazil scored their second goal despite a clear handball by the Brazilian striker Luis Fabiano.

“They were allowed to take a two-goal lead and that changed everything.”

“I heard Brazil complain a lot, but I don’t think they should, it is extra difficult when Fabiano is allowed to use his hands. It was not just once, it was twice,” said the Swede referring to the sending off of midfielder Kaka for pushing Abdelkader Keita.

The Swede argued that the second yellow card against Kaka was warranted. But added that he feels Brazil have the mark of potential world champions.

“I think the Brazil team can go all the way, they have quality especially in defence,” he said.

“You need to be almost perfect to beat Brazil. In every way they are good, they are very good.”

“It was a totally unjustified dismissal of Kaka, he was fouled and yet he was punished. The player who commits the foul escapes the yellow card, I have to congratulate him for that,” said Dunga.

“We are left a bit in doubt, what do we have to do in order not to receive these yellow cards?

Having earlier picked up a yellow card for a push on Yaya Toure on 85 minutes, Kaka was shown red three minutes later when Keita ran into the Brazilian, who was looking the other way.

“I won’t make any comment about the red card,” fumed Kaka after the game.

Keita appeared to wildly exaggerated the impact of the shove by falling to the ground, dramatically clutching his face.

“I think all of you saw the image and everything else, so I have nothing further to say. The images are there for all to see and you are able to see what really happened.”

Brazil have now qualified for the second round but Friday’s match against Portugal could decide the winner of group G, dubbed “the group of death”.

“We are not sure who will replace Kaka for the next game, we will think about it over the next few days,” Dunga said.

Brazil booked their place in the knock-out phase thanks to goals either side of half-time by Sevilla’s Luis Fabiano, on 25 and 52 minutes, and Galatasary’s Elano, who converted a Kaka cross on 62 minutes.

The loss leaves Ivory Coast needing a win against North Korea in their final game and hoping that Portugal slip up in their remaining two games, in order to join Brazil in the knock-out rounds.