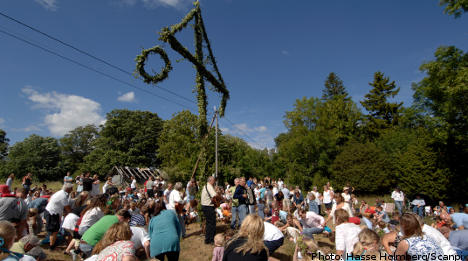 Monday is thus the longest day of the year in the northern hemisphere with the sun due to reach its zenith over the Tropic of Cancer which runs through the Sahara desert.

Tuesday will be a only slightly shorter day as the sun starts its long drag towards the Tropic of Capricorn in the southern hemisphere. The winter solstice will this year fall at 1.38am on December 22nd.

In many cultures the solstice is seen as the changing of the seasons but in Sweden it is celebrated with the Midsummer festivities which will be held this weekend. As Midsummer’s Eve always falls on a Friday the celebration rarely fall on the solstice itself with the next time the dates collide being in 2013.

Midsummer in Sweden is a festival that pre-dates Christianity although the church elected to celebrate the birthday of John the Baptist on June 24th and this remained the official Midsummer’s Day until 1953, when the current situation was introduced.

The festival is celebrated across the country with many Swedes regarding the celebrations as more important than Christmas. The cities are typically drained of people who head to the villages to dance and sing around a decorated staff, eat herring and strawberries, and drink snaps.

Swedish celebrations are not however limited to Sweden with one of the larger overseas events held in Battery Park on southern Manhattan. The New York City annual event, which has been held since 1996, attracts around 5,000 revellers.