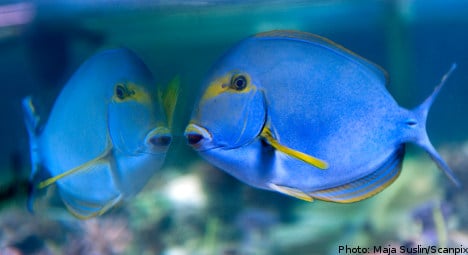 While its adverse effects are well known to mating humans, Swedish researchers have now shown that blurred vision, brought on not by alcohol consumption but by murky waters, can leave romancing fish counting the cost of their chance encounters.

“It is like a late night in a bar…,” said Josefin Sundin at the department of ecology and evolution at Uppsala University, to news agency TT.

The researchers studied the procreation activities of the broadnosed pipefish (Syngnathus typhle) while its Baltic sea habitat was suffering a periodic bout of blue-green algae blooming.

They were able to establish that the male broadnosed pipefish would choose the largest female mate when the waters were clear, but in murky seas it would select its mate more randomly.

“I thought that it would use its sense of smell, but it didn’t,” Sundin said explaining that that as the eggs of a larger female fish are superior they are less likely to die and thus complete the breeding process.

The researchers found that their results could be applied to other species of fish, such as the three-spined stickleback, but it is not known if blurred sight can also lead to poor carnal judgement even among other more common species such as salmon and pike.

The Baltic sea is regularly plagued with outbreaks of algal blooming in the warmer summer months. Discharges of phosphates and nitrogen have been substantial since the 1970s and levels of pollutants ultimately reached levels that disturbed several functions of the sea’s ecosystem.

Oxygen levels have progressively declined in the water and areas of the sea-bed devoid of oxygen have expanded. Several years ago the ecosystem shifted from nutrient-poor to eutrophication.

Environmental ministers from the countries around the Baltic Sea agreed in 2007 on goals to re-establish natural levels on discharges. This means that the annual emission of phosphates needs to decline by 15,000 tonnes per annum and nitrogen by 137,000 tonnes.

The Local reported in May 2009 that research had begun to indicate some improvement and that the negative environmental trend had been broken.