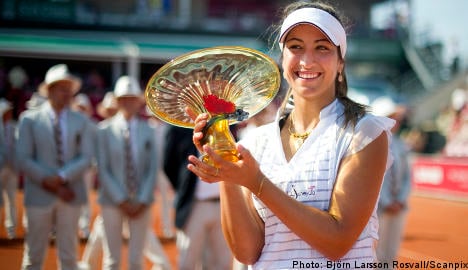 It was the second title this season for Rezaï, ranked 19th in the world. Earlier this season, she stole the show at the prestigious Madrid tournament, defeating US star Venus Williams.

Seeded second here, Rezaï did not have it all her own way against fourth-seeded Dulko, who had beaten her in both of their previous encounters, before winning 6-3, 4-6, 6-4.

Rezaï started strongly, leading 6-3, 3-2 and holding two points for 4-2 before Dulko bounced back, winning four of the next five games to take the second set. The momentum swung towards Rezaï in the third set as she cruised to a 4-0 lead in the final set.

Just when it seemed she had the upper hand, Rezaï lost her service to love and a string of unforced errors allowed Dulko come back to 4-3. However, Dulko double faulted, giving Rezaï 5-3 and a double match point.

The Argentine saved both, the first when her opponent double faulted and then with a powerful return of serve, to make it 5-4. Rezaï made no mistake on her third match point, breaking Dulko’s serve to take her fourth career title, following wins at Strasbourg and Bali last year and Madrid this season.

Dulko bounced back to defend her doubles title with Italy’s Flavia Pennetta, winning 7–6 (0), 6–0 against the Czech Republic’s Renata Voráčová and Barbora Záhlavová-Strýcová.

After the tournament wrapped up, the SkiStar Swedish Open (Swedish Open Båstad) for men on the ATP Tour opened on Saturday. Båstad is best known for the tennis tournament, held each summer since 1948.

The city has has the most tennis courts in the country and has fostered many internationally successful tennis players. The town attracts some 20,000 visitors during this time. Meanwhile, the women’s tournament moved to Båstad from Stockholm last year.