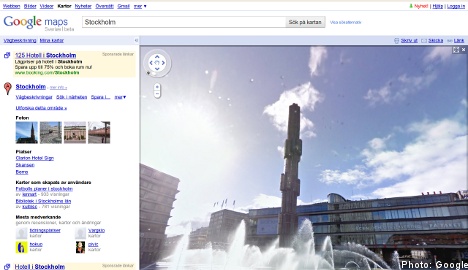 It was initially launched in the US in May 2007 and unveiled in Sweden at the end of January. Hitta.se, a Swedish search engine with a telephone directory, addresses and maps, has offered a similar service called Gatubild since December 2008.

The company announced on Friday that the camera-equipped cars would resume operating in Ireland, Norway, South Africa and Sweden next week and in others later.

The cars drive around taking photographs for Google Maps.

“Having spoken to the relevant regulators, we have decided to start Street View driving in Ireland, Norway, South Africa and Sweden again starting next week,” Brian McClendon, a Google vice president of engineering, said in a blog post. “We expect to add more countries in time.”

Google grounded all Street View cars in May after disclosing that they had mistakenly gathered snippets of private data sent over unsecured wireless networks. Google faces lawsuits and investigations in a number of countries in connection with private wireless data collected by Street View cars.

McClendon said the cars “will no longer collect any wi-fi information at all, but will continue to collect photos and 3D imagery as they did before.”

He said wi-fi data collection equipment has been removed from its cars in each country.

“We recognise that serious mistakes were made in the collection of wi-fi payload data and we have worked to quickly rectify them,” McClendon added. “However, we also believe that Street View is a great product for users, whether people want to find a hotel, check out a potential new home or find a restaurant.”

Meanwhile, Google issued an apology in Australia over the collection of private data there by Street View cars and pledged to work “even more closely” with the country’s privacy commissioner in the future.

“We want to reiterate to Australians that this was a mistake for which we are sincerely sorry,” Google senior vice president Alan Eustace said in a post on the Google Australia blog.

“Maintaining people’s trust is crucial to everything we do and we have to earn that trust every single day,” Eustace said. “We are acutely aware that we failed badly here.”