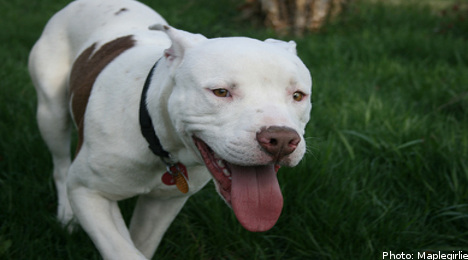 Odell proposed that housing companies should be given the responsibility to introduce temporary bans in their rental contracts. But if the initiative does not prove sufficient, then the Odell’s party the Christian Democrats want to see legislation.

“It’s not a human right to keep menacing dogs which threaten other people,” said Mats Odell to the TV4 Nyheterna news programme.

Odell has been inspired by a similar ban a dozen breeds of dog introduced in Denmark in June. The Danish initiative means the named breeds can no longer be imported or bred.

Among the breeds banned in Denmark under the legislation include the Pit Bull Terrier, the Argentinian Dogo, Brazilian Mastif, American Staffordshire Terrier and American Bulldog.

Mats Odel was asked whether the problem was not with the dogs but with their owners.

“Sweden is an open country and there are people with different lifestyles and interests living here. The people are one thing, but if they keep dangerous animals which are bred because they are aggressive then I think that it is time to act,” he told TV4 Nyheterna.