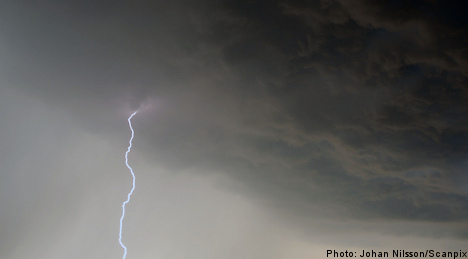 The town of Årjäng was the worst hit with a house, a cabin and garage succumbing to fires caused by lightning strikes. According to SOS Alarm there were no people in any of the buildings at the time.

In the town of Torsby several trees were blown over and a number of properties sustained flooded cellars in the storm.

The rough weather had eased somewhat by 2am, and according to SOS Alarm there were no reports of injuries or closed roads.

Meteorological office SMHI has warned that more stormy weather can be expected on Tuesday morning with the risk of thunder and lightning high in Skåne, on the west coast, in Värmland and in western Dalarna during the day.

“The front will then wander slowly east over Götaland,” said Sten Laurin at SMHI.

On Tuesday the stormy weather will traverse a line from the Dalafjällen hills over Örebro and Östergötland.

“It continues up towards the Stockholm area on Tuesday evening. The worst of it should have eased by then, it is not usually so intense when it comes by night.”

The stormy weather will then leave the Swedish east coast and head towards Finland, according to Laurin.

Temperatures for the remainder of the week are forecast to be in the region of 25-30 degrees Celsius in most parts of the country. The highs of the weekend, which saw new record highs set in Lund and Målilla, will not be repeated, SMHI said.