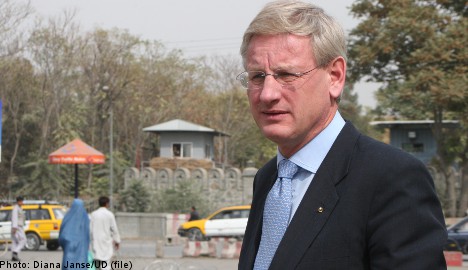 Several aircraft on their way to the conference, including Bildt’s, were diverted following a terrorist attack on Tuesday.

“When we were coming in to land, there was a rocket attack,” Bildt said. “We had to cancel the landing and circle around for a while and then land at the Bagram base outside Kabul. A number of hours later, we went to Kabul by helicopter.”

Bildt himself was not attacked and was joined on the trip by UN Secretary General Ban Ki-moon. The Taliban later wrote on its site that it had carried out the attack on the airport, the American information service Site, reported AFP.

“However, those who were standing and waiting at the airport saw it clearly. It was pretty close,” he said.

When asked if he was scared, Bildt told news agency TT, “No, we interrupted the course of landing so there was no danger to us. Had we been just minutes earlier, it could have been different.”

At the conference in Kabul, Bildt stressed the need for the vigorous development of Afghan civil society.

“The advantage is that we are building Afghan institutions instead of us having a variety of uncoordinated projects around the country,” he said. “The Ministry of Finance is among the institutions that is function relatively well, actually,”

Bildt is also cautiously hopeful about the country’s economic opportunities.

“The agricultural potential in parts of the country is of course important, opium production notwithstanding” he said.

Tackle narcotics production requires profitability in other industries and Bildt believes in the development of industries such as mining and fruit growing.