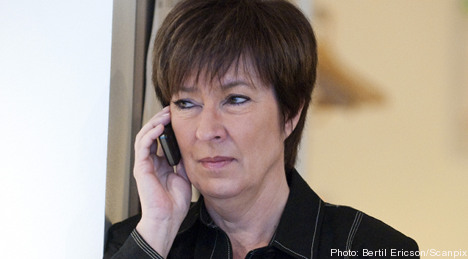 Like previous elections since the list was first activated in 1999, the service has not stopped political party advertisements from reaching the numbers registered on the list.

As the political propaganda calls to Nix phone numbers intensify ahead of the vote on September 19th, the number of questions and complaints about the service are increasing, noted Mikael von Ekensteen, CEO of the Swedish Direct Marketing Association (SWEDMA), an interest organisation for direct marketing that is behind Nix.

“We have observed a small increase and there will be questions about what applies, what one may or may not do,” he said.

He believes that political parties should take into account who is on the Nix register when they call. Market research, political and religious information are not subject to the Marketing Act and as such pass unhindered through Nix’s filters.

The ruling Moderates have pledged not to use phone campaigns at national level during this election campaign.

“Not centrally. There may be individual associations that may do it,” said Pär Henriksson, the head of communications for the Moderates.

The last time the Moderates embarked on a large telemarketing campaign was during the 1991 election campaign. This year, the party is investing in door-to-door canvassing, making phone advertising less important, Henriksson said.

They are also betting on television advertising and information through social media on the internet.

“The number of people on the Nix register is growing and do not want calls and part of it is there are quite simply a lot of telephone salespeople,” he added. “Our assessment is that telemarketing is not effective.”

The Social Democrats have a campaign goal of reaching 1 million voters directly. Many local divisions have chosen to call. However, they claim to have ensured that they have checked who is on the register first.

“We have a policy of not calling those on the Nix register,” said Anna Helsén, press spokeswoman for party leader Mona Sahlin.

POLITICS
What Britons in Europe need to know about the UK government’s ‘votes for life’ pledge
Url copied to clipboard!