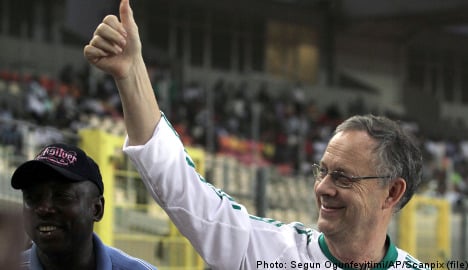 continue in his post despite being offered a four-year deal, with Samson Siasia being lined up as a replacement.

because he feared that he might not be able to pen a four-year deal that would keep him in Nigeria for that long,” Maigari told sports daily Soccer Star.

World Cup. He said the experience was worth it and that he would always

remember Nigeria and her good people.”

Maigari added that Lagerbäck told him that his family played a big role in his decision not to extend his five-month contract. Lagerback was in charge when Nigeria finished bottom of their first round group at the 2010 World Cup in South Africa.

However, the NFF agreed to hand the Swede a long-term deal on the evidence of the work he put in within a short time. The NFF top official also disclosed that Siasia will next month be confirmed as the country’s new coach on a four-year contract.

“We have had talks with Siasia. The talks have been fruitful and all things being equal, he will put pen to paper next month subject to negotiations,” said Maigari. “Siasia is the coach Nigerians want and we shall give him all the support to succeed in this new job.”

Siasia led the national team to the final of both the 2005 FIFA Under-20 World Cup as well as the 2008 Olympics. The former Lokeren and Nantes striker is currently handling Heartland FC of Owerri in the CAF Champions League.

over the Olympic team.