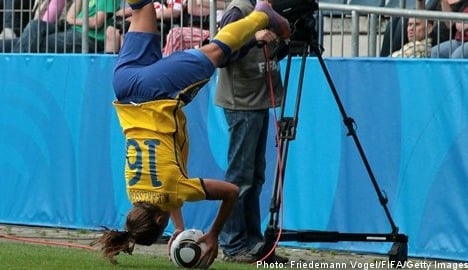 Despite bowing out of the competition in the quarterfinals over the weekend, the young Swedish team showed it is a force to be reckoned with ahead of the senior FIFA Women’s World Cup next year, also to be held in Germany.

“Today isn’t a day for moping in bed – quite the opposite in fact,” Swedish captain Emilia Appelquist told FIFA.com following her side’s 2-0 defeat to Colombia on Saturday in an interview published on Monday. “The atmosphere in the squad was very good. We just didn’t have a very good day.

She added, “We had a lot of fun. The tournament has been a great experience for all of us and we got a lot further than I think anyone would have expected.”

The Swedes fought back from 1-0 down to beat New Zealand 2-1 in their opening match before drawing 1-1 with Brazil. In the battle for first place in Group B, Sweden came from behind once again to overcome 2006 champions North Korea 3-2.

Antonia Göransson demonstrated that her transition from wing to striker at the tournament was the right choice, dazzling crowds with her attacks alongside Sofia Jakobsson.

The duo were unable to help Sweden advance out of the final eight. The 2-0 loss to Colombia was the team’s sole defeat and the only effort in which they failed to score.

“We lost the game in the first 25 minutes,” Barrling said shortly after the match. “We weren’t aggressive enough in defence and when we did manage to get hold of it, we lacked the necessary prowess in attack. Colombia proved themselves to be tough opponents and they deserved the win.”

“It’s another great addition to women’s football that makes it fun for the spectators to watch,” Göransson told FIFA.com. “It’s also an excellent way for us to effectively turn a throw-in into a cross and cause a stir in the opposition defence.”

The U-20 tournament began on July 13th, two days after the end of the World Cup in South Africa, and ends on Sunday. Fans can look forward to see who on the team will make the senior squad for next year’s FIFA Women’s World Cup, which takes place from June 26th to July 17th, 2011 in Germany.

Sweden’s triumph also comes on the heels of the end of the Gothia Cup in Gothenburg on Saturday, the world’s largest youth football tournament. This year, 35,200 players from 1,567 teams and 71 countries competed, with 71 percent of the participants boys.