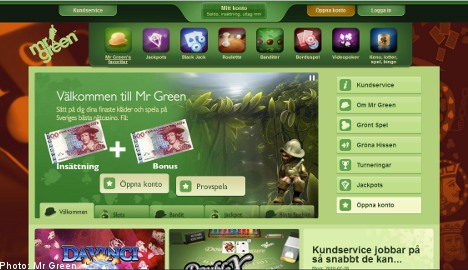 from their account. It was just like being at an automatic teller machine,” the web-casino’s managing director Mikael Pawlo told AFP.

The computer bug affected a newly launched game and lasted from Monday afternoon to Tuesday morning. Some 200 gamblers benefited from the fault, but won’t be able to keep the money as their accounts were later corrected.

“We’re happy when our guests win, that is what makes us appealing. But in

this case, it was a bit too much,” Pawlo explained. “Those technical faults are exceptional, but happen sometimes with new games,” he added.

The aim of the game, called “House of Fun,” was to find the way out of a

house by opening doors and clicking on animations. Mr Green was launched in August 2008. It is registered in Malta and has some 150,000 customers in Sweden, Finland, Britain and Austria.