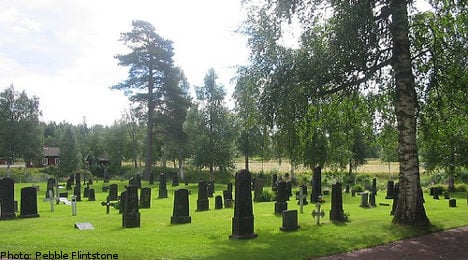 The incident happened at around 5.30pm on Wednesday at Brågarps church in Skåne in the far south of Sweden, the local Sydsvenskan daily reported.

As the woman was bending over to leave flowers by the tombstone her leg began sinking into the soft earth and she was left marooned with one foot in the grave.

Luckily for the woman there were several witnesses to her plight as the church was due to hold an evening service. The emergency services were called and were able to extract her safely from the grave.

The woman, while shocked from the incident, did not require hospital treatment.

Brågarps church pastor, Jonas Kristiansson, explained that heavy rains had caused subsidence in several areas of the churchyard although added that it was a rare occurrence that someone actually sinks into a grave.

“I have been working here for eleven years and I have never seen anything like this,” he told the newspaper, adding that the parish plans to repair the grave to its former state on Thursday.