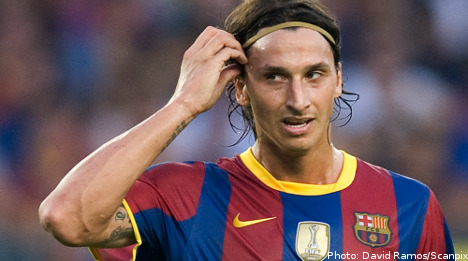 Milan are reported to be prepared to hand over almost 400 million kronor ($53.7 million) for the star, who cost the Catalans around €40 million plus Samuel Eto’o only last summer. Ibrahimovic has been given 24 hours to mull the move, the Expressen daily has reported.

The two clubs have been in discussions since they met in a friendly match at the Camp Nou on Wednesday evening.

“We didn’t speak about anything in particular. Right now everyone’s talking about Zlatan, I told him that if he should come to Milan he would be welcome and it would be a pleasure to play with him, but we’ll see what happens,” Ronaldinho told the official Milan Channel.

Ronaldinho’s place in the Milan starting XI could come under threat should the former Inter Milan and Juventus striker join the team.

But the former Barcelona star and twice world player of the year still wants Ibrahimovic to make the same move from the Camp Nou to the San Siro that he made two years ago.

However he also believes that without the Swede, Milan have what it takes

to improve on their third place finish in Serie A from last season.

“Even without Ibrahimovic we’re a team that works hard, we can’t wait to start the season so we can do well,” he added.

“All the players are very motivated and that makes me happy, personally I want to win trophies with Milan and now I must start my work to help the team win.”

“Last season we did well, (although) we let the possibility of winning the league slip away.”

“There are many other good teams in the league but we can also do well.”