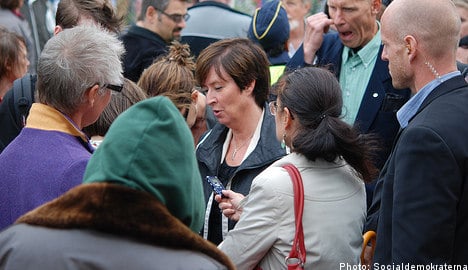 Carl Melin, opinion director at United Minds, said the Social Democrats have lost ground to the Green Party, the Alliance and the couch.

“It is clear that the Social Democrats have major problems and continue to lose voters,” he told the newspaper.

In her party’s defense, Social Democrat leader Mona Sahlin pointed out that there are still three weeks left before the election.

“We have a huge task ahead of us, which I think is quite feasible,” she told Aftonbladet. “The difference is only about two percent that we need in order to win the right to form the government.”

United Minds uses so-called online panels with pre-recruited respondents who are representative of the population as a whole in terms of gender, age and residence.

The results are also weighted according to how the participants have voted in previous elections and include opinion institutions that undertake more traditional means of random population samples.

In addition, another poll has shown the Alliance increasing its lead over the red-greens. Skop’s latest measurement also revealed that the Sweden Democrats would get less than 4 percent of the vote and would not be able to enter Sweden’s parliament, the Riksdag.

“The Sweden Democrats continue to balance on the Riksdag’s barrier,” said Skop analyst Birgitta Hultåker. “This week, they are below 4 percent and would be without a parliamentary mandate if the Skop poll were an election result.”

Five percentage points are all that separates the two coalitions. The Alliance stand at 49.8 percent support, while the red-green have 44.8 percent. The Moderates are the largest party.

All the other parliamentary parties currently in the Riksdag would also remain, according to the measurement. The Centre Party is the party that is closest to the four percent threshold, with 5.1 percent of the vote. Next are the Christian Democrats, with 5.2 percent.

The party that lost the most ground since the last measurement was the Social Democrats, falling 1.2 percentage points behind, while the Left Paty gained the most support, winning an additional 0.9 percentage points.

In the last week, the Alliance has increased its support by 1.1 percentage points, while support for the red-greens has fallen by 0.5 percentage points. All changes are within the statistical margin of error, according to Skop.