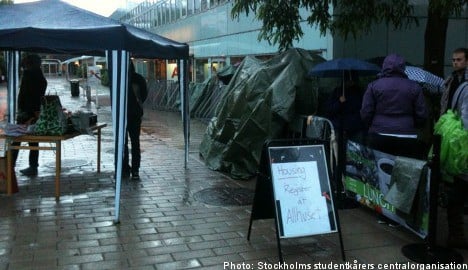 “There are around ten students currently camping. This by no means how many are in fact homeless – it takes a lot of courage to come to terms with being homeless, and to live in a tent,” said Kyle Verboomen, who is engaged as international student coordinator at the Stockholm University student union, to The Local on Tuesday.

Verboomen said that many students arriving at Stockholm University for the autumn term were misled to believe that accommodation would be made available but when they arrived found that this was not the case.

“There is simply not enough room in the pot. I would say to the university – do not admit students that you can not house,” he said, arguing that a coordinated approach is required to ensure that all departments are giving out accurate information over the situation.

The student union has responded to the situation by providing tents for homeless international students as a last resort, and as a protest to push the university to act.

The union has urged Stockholm residents to get in touch if they are able to offer a room, a couch, or floor space to needy students, even if only for a short period of time.

“It is not nice for the international students to be camping out, by a public walkway and with all the Swedish students walking past and seeing them there,” Verboomen said.

Housing shortages are a common feature of student life in several Swedish cities, but in Stockholm the problems are exacerbated by a rental housing market that exists in name only.

More than 300,000 people are waiting in line for a rental contract in the capital, home to around 2 million people. While this doesn’t mean that as many are in fact homeless, a large number live in unstable sub-let arrangements, leaving slim picking for groups, such as international students, who arrive for short term stays.

The queue for student apartments in Stockholm has increased dramatically over the past few years to 50,000 people for a housing stock of only 8,000 dwellings.