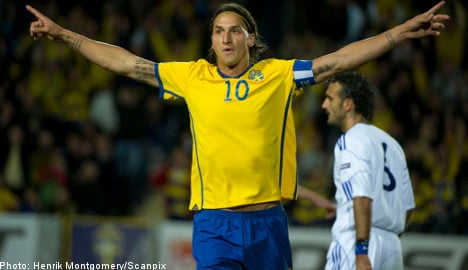 “It felt fantastic. We played in my hometown, we managed to score six goals, it doesn’t get any better than this,” Ibrahimovic told TV10, which began broadcasting on Tuesday.

“The fans showed what I meant to them and I tried to give back as much as I could.”

The victory came despite the dismissal of defender Olof Mellberg in the 34th minute, with the team already up 3-0 after 26 minutes.

Sweden now sits atop Group E along with the Netherlands after both teams notched two wins for an undefeated record. Sweden beat Hungary 2-0 on Friday at Råslunda in Stockholm, while the Netherlands also overpowered San Marino 5-0.

Kim Källström helped to set up the third goal, a Pontus Wernbloom header that appeared to take a touch off San Marino keeper Aldo Simoncini before rolling into the net.

Meanwhile, Mellberg was sent off for a bad challenge on Simone Bacciocchi before the second half. Sweden coach Erik Hamrén replaced Ola Toivonen at halftime with Andreas Granqvist, which paid off when he netted Larsson’s free kick in the 51st minute.

Simoncini kept up a string of fine saves, but it was not enough, with Ibrahimovic scoring again in the 77th minute before Marcus Berg closed with a close-range header in injury time.