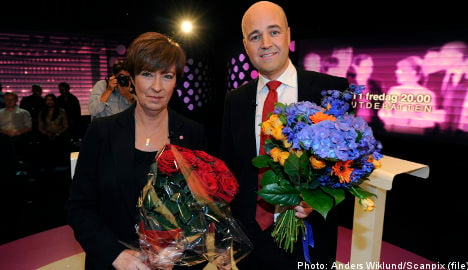 “We won’t touch them [the Sweden Democrats], even with tongs,” Prime Minister Fredrik Reinfeldt vowed on behalf of his four-party centre-right coalition during a long and heated debate broadcast live on Swedish public television.

Mona Sahlin, who is vying for his job heading the so-called Red-Green opposition coalition made up of her Social Democrats, the Greens and the formerly communist Left Party, agreed.

“The Sweden Democrats…always make the immigrants the culprits, either for taking jobs or for not taking jobs. Such a party can only be met with a crystal clear message: that we will not touch them, not cooperate with them,” she said.

Their comments came as a Novus Opinion tally of five different polls published Sunday by Swedish public radio handed 4.6 percent of voter intentions to the far-right anti-immigrant party, which would be enough to secure them a place in parliament for the first time.

Observers have pointed out that if neither of the main political blocs, which have been neck-and-neck in polls for months, manage to secure more than 50 percent of the vote on September 19th, the Sweden Democrats could easily become the kingmaker in the parliament.

Reinfeldt’s Moderate Party and its coalition members, the Liberal, Centre and Christian Democrat parties, have in recent polls taken a lead and in Sunday’s tally, registered 50 percent of voter intention, compared to 43.6 percent for the centre-left opposition.

The prime minister has in recent weeks met criticism for saying he plans to hold on to his job if his coalition wins most votes, even if it means creating a minority government, with critics saying he then could be open to pressure from the far-right.

However, on Sunday, he stressed that if his bloc does not secure a majority, it will need to seek “a broader parliamentary solution,” most likely looking to the Green Party for support.

Meanwhile, Sahlin reiterated in Sunday’s debate that she would not create a minority government that could be open to influence by the Sweden Democrats, insisting, “Sweden needs a majority government.”

She has in recent weeks said she may try to woo over the Centre and Liberal parties if the opposition wins most votes, but not a clear majority, but both of those parties have said they would decline such an offer.