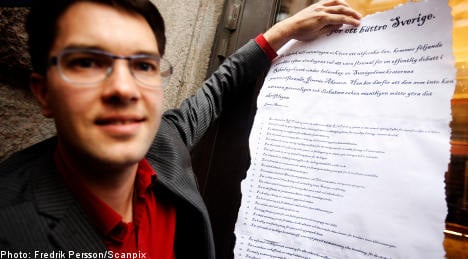 Speaking ahead of Sunday’s parliamentary elections, Åkesson called for his political opponents to at least read his plans.

“We want those who will be our colleagues starting next week to know what to expect from us and what issues we expect to push,” he said.

Åkesson unrolled a long scroll of 99 proposals, apparently meant to evoke the 95 Theses that Martin Luther nailed to the door of Wittenberg Cathedral in 1517, launching the Reformation.

Recent polls suggest that the party will for the first time break the four-percent threshold required to win seats in parliament.

They might even be handed the role of kingmaker if neither the right or leftwing blocs win a clear majority.

Yet the party was not allowed to take part in the political debates leading up to Sunday’s vote.

Prime Minister Fredrik Reinfeldt and his left-wing opponent Mona Sahlin both say they will never cooperate with the anti-immigrant party.

Today however, it “has more influence now and they cannot treat us that way anymore,” Åkesson told AFP.

The party would win between six and eight percent of the vote, he said, adding: “We are prepared to negotiate with all the parties.”

Earlier on Saturday, the far-right party’s website was hacked, and only a digitised picture made up of numerals to look like a piece of birthday cake with a lit candle was visible.

By Saturday evening however, the website was working again.

“We have had hacker attacks over the past 24 hours. We have no idea where it is coming from,” party spokesman Erik Almqvist told AFP.

“I think it is a shame. Our political opponents should take the debate with us if they disagree with us,” Almqvist said.

The attack was not good for democracy, he added.