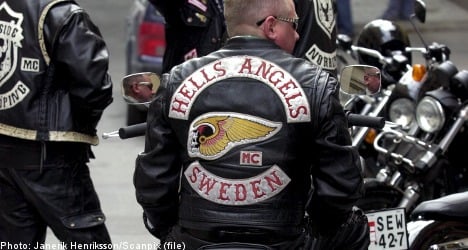 Bandidos, Hells Angels and other criminal biker gangs that are already established in Sweden are becoming more firmly entrenched in Europe as the creation of new gangs accelerates in the country.

While many criminal motorcycle gangs are already well-established in Sweden, a new wave of expansion is underway, driven by growth within the Hells Angels, Bandidos and Outlaws.

“In the last three years, Hells Angels has started five new divisions in Eskilstuna, Norrköping, Luleå, Uppsala and a new division in Stockholm. Previously, it took them 10 years to start up so many new divisions, so the curve has risen steeply,” said Lasse Wierup, a journalist, author and expert on motorcycle gangs told the TT news agency.

Part of the reason is that a new international motorcycle club, the Outlaws, has established itself in Sweden. For example, HA’s new division in Uppsala was a response to the Outlaws’ establishment there.

Wierup estimates that there are 300 to 400 full members of motorcycle clubs and as many supporters who live by what Wierup calls the “one-percenter culture”.

What sets the so-called “one-percenters” apart is their desire to isolate themselves from society and live by their own rules and laws, wherein which 99 percent of motorcyclists are law-abiding citizens.

“They are the most organized, have the best discipline and the lowest member turnover. They also dedicate themselves to the most sophisticated crimes that bring in the most money, hire illegal workers in the construction industry and engage in drug trafficking, money laundering and extortion,” Wierup said.

Bandidos has eight or nine divisions, engages in the most violent crime and does not bring in a lot of money. Newcomer the Outlaws, with a handful of divisions, consists mainly of “ordinary family men” and do not yet pose any criminal problems, according to Wierup.

Police reaction suggests that it has been easiest to intervene against violent criminals within Bandidos. Hells Angels is more vigilant and the most difficult to combat.

“The police have begun to cooperate with other authorities such as the Swedish Tax Agency (Skatteverket) and the Swedish Enforcement Administration (Kronofogden) and that has made life tougher for gang members. It also protects the extortion victims more now than before. However they should perhaps work more pro-actively [in prevention],” said Wierup.

According to European police organisation Europol, there are now more criminal motorcycle gangs in Europe, with 425 subdivisions, than in the United States, which have about 300.

In the last five years, 120 new subdivisions have launched in Europe.

In addition, European motorcycle gangs have also become larger than those in than North America, where biker gang culture originated.