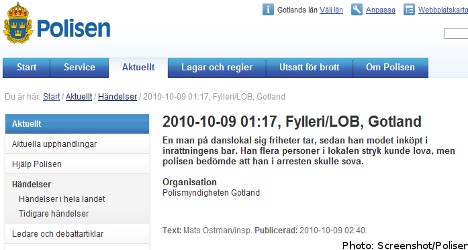 “Everything else that happened that evening was just tedious misery. Dour reading. This was an attempt to make it more interesting and readable,” Mats Östman told The Local on Monday.

The incident report, filed by the 42-year-old police officer, went as follows:

”A man in a dance hall took his liberty far, having bought liquid courage in said establishment’s bar. After a brawl with several patrons there was inferred, police decided that in custody he be interred.”

Östman confirmed to The Local that while this was not the first time he, and his police colleagues, had let their creative juices flow when reporting crime on the Baltic Sea island, the occasional practice had gained a higher level of exposure since crime reports began being published on the internet.

“Previously we just collated our report and submitted that. There were then just a few journalists who called if they had read something, it is not as if we read out a rhyme to them over the telephone,” Östman joked.

“The new internet forum gives us another freedom to write our reports,” he said.

Mats Östman told The Local that while some people have been critical of his rhyming report since its publication, the reactions have on the whole been positive.

“There are those who have opinions over what a police officer should write, but reactions have generally been supportive.”

But despite the positive feedback, Mats Östman has no plans to hang up his police badge to turn his hand to poetry full time.

“No. Two of the rhymes were useless and had no value at all, possibly aside from the fact that they came from a police officer.”