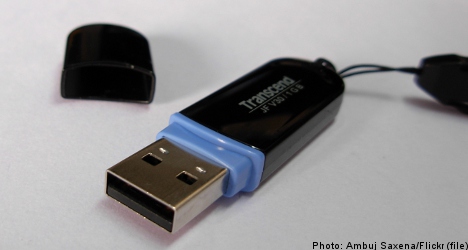 “I am very happy,” the unnamed professor told the local Västerbottens-Kuriren newspaper.

“This story makes me feel hope for humanity.”

The professor, who wished to remain anonymous, is one of the most successful in his field, according to the newspaper.

Having recently had surgery, the professor could not be bothered to drop off his backpack in his apartment before first going to the laundry room.

He instead left the bag behind a door in the stairwell, thinking it would be safe for a few minutes.

But when he returned a short time later, the bag was missing, along with the computer, keys, calendar and other documents inside.

The professor was most upset by the loss of his calendar.

“It is my life. I have documented everything in it that has happened in the last 10 years and beyond,” he told the newspaper.

He then called the police to report the incident and blocked the credit cards which were also in the bag.

But when he went down to the stairwell a short time later, he couldn’t believe his eyes.

“The backpack was there again. With all the papers, calendar and credit cards. It was just the computer that was missing,” he explained.

“Unfortunately, I have been bad at backing up my computer.”

Resigned to having lost his computer, the professor was nevertheless happy to have the rest of his belongings back.

But the considerate thief had yet one more surprise in store.

About a week after the theft, the professor returned home to find an envelope containing a USB memory stick which had been taken along with the computer.

The professor was shocked to discover the thief had copied all the documents and personal files from his laptop to the memory storage device, a process which likely took hours.

All things considered, the professor is delighted at the outcome, despite the loss of his computer. He hopes, however, that other thieves can learn to be as compassionate.

“Often when people lose their computers and cameras, it is understandably not the gadget itself that is the most important. The content is often irreplaceable,” he told the newspaper.

Besides the computer, the only other item that has not yet been returned is the professor’s library card.

“Perhaps the thief needs to improve him or herself,” the professor joked.