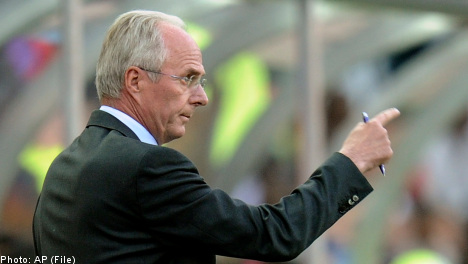 The comments come following England’s disappointing goalless draw in a Euro 2012 qualifier against Montenegro at Wembley on Tuesday.

The Swede, now in charge of Championship club Leicester City, led England to two World Cup quarter-finals during his reign and was popular with the players because of his relaxed approach.

In contrast, the no-nonsense Capello has reportedly been known to ignore players when he walks past them. That hands-off style has so far failed to win over the squad and England crashed out of this year’s World Cup in the second round.

Eriksson, who skippered England from 2001 through the 2006 World Cup, is convinced Capello would get more from his players if the Italian adopted a laid-back approach.

“I always treated my players like men,” Eriksson told The Sun. “I would certainly never walk past a player in the corridor and not speak. Why should I do that? They have to play for you so of course I would speak to them.

“If you want them to do everything they can for you, then you have to treat them with respect.

“Yes, they should always know who is the boss – but they do know that. So treat them as grown-up people.

“The big question for me is – are the players happy? Because in my mind it is all about building the right relationship with your players and creating the right atmosphere.

“Is that the case with England? I don’t know. It is difficult for me to say yes or no because, to know for sure, you have to be close to the situation and I’m on the outside.

“But I believe it is so important that you trust your players and believe they will trust you.”