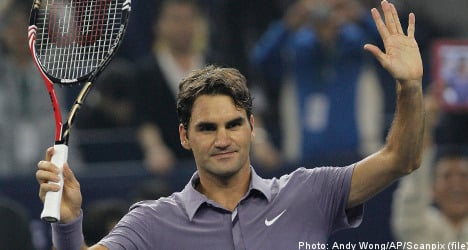 World number three Federer was due to play at the Kungligahallen in 2008, but was unable to appear due to fatigue and injury problems. The world number two made his only appearance in Stockholm a decade ago.

This year is different, with Federer to carry his momentum from the Shanghai Masters into the final run of events of a 2010 season which has been a shade under his normal level of superlative.

Federer will have until mid-week to get acclimated after playing in China, with his first round in Stockholm a bye along with second seed and Swedish rival Robin Söderling, number three Wimbledon finalist Tomas Berdych and number four Croatian Ivan Ljubicic.

Stanislas Wawrinka joins his celebrated compatriot in a Stockholm debut, taking the fifth seed and squaring off in the first round against Italy’s Andreas Seppi.

Oranisers have cut a break for slumping American James Blake, recalling his two Stockholm championships in 2005 and 2006 and handing the 31-year-old now ranked 120th a wild card.

Cyprus’ Marcos Baghdatis is not entered in this edition. The tournament is under new management with former Swedish players Thomas Johansson and Jonas Björkman now running the show.

The presence in management of a pair of former colleagues could well have helped in the quest to secure the services of the wildly popular Federer for an event where the aging but historic tennis hall holds well under 10,000 and is assured of daily sellouts.

Spain’s Feliciano Lopez, number seven Brazilian Thomaz Bellucci and Spain’s Tommy Robredo round out the seeds as the ATP season enters its final three weeks with four spots in the finale in London next month still open.

Söderling, fifth in the world and hammered 6-1, 6-1 in the Shanghai quarters by Federer, is next in the queue for a place and could well book it during the Stockholm home week. No Swede has not won the title since Johansson in 2004 and 2000.