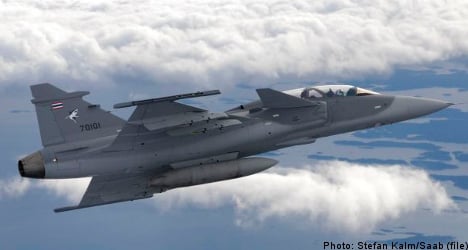 “Our underlying profitability for the full year 2010 will be about the same level as 2009, whereas our reported operating income will be lower, so we have changed our outlook for 2010,” President and CEO Håkan Buskhe said in a statement.

Earlier, the company had said it remained cautious about order intakes and predicted sales and profitability would stay at about the same levels as 2009, adding its long-term financial targets remain.

Instead, the company will now pursue restructuring measures to cut costs.

“In order to secure future performance, we are evaluating measures for product areas where we see low demand and will take steps to further reduce administrative costs. Due to changes in demand, we see a need to take structural actions in the fourth quarter,” Bushke said.

The further restructuring costs will amount to about 500 million kronor, according to Saab.

Saab shares fell sharply when trading on the Stockholm Stock Exchange opened on Wednesday morning. By 9.20am, shares had declined 5.1 percent to 102 kronor.