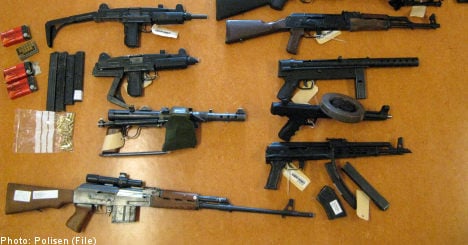 Guns confiscated in a 2008 raid outside of Stockholm

“It’s unacceptable that people who are found with loaded weapons are released again after only one or two days,” Per Lidehäll of the Skåne County police told the Skånska Dagbladet newspaper.

In 2010 alone, there have been more than 50 reported shootings in Malmö. The town remains on edge following an announcement by police on Wednesday that a single gunman may be responsible for up to 15 shootings targeting people with immigrant backgrounds.

On Wednesday night police confirmed that the same weapon had been used in several of the shootings.

“We’re looking at a handgun, either a pistol of a revolver. If we find the gun in question, we’ll have made a huge breakthrough. Now we have something concrete that shows that the shootings are related,” Börje Sjöholm of the Skåne County police told the TT news agency.

While Sjöholm confirmed the same weapon was used in several of the shootings, he refused to say exactly how many of the victims may have been shot with the same gun.

According to Lidehäll, there are “too many” guns on the streets in Malmö, with many having been smuggled in over the Öresund Bridge or simply procured illicitly over the internet.

Police hope that updating legislation may help address the problem. They argue that current laws don’t reflect the realities of contemporary society. Whereas weapons seizures were a rare and noteworthy event years ago, today finding and confiscating guns is nothing out of the ordinary.

Currently, illegal firearm possession carries a maximum penalty of one year in prison, while those convicted of aggravated gun crimes in Sweden are sentenced to between six months and four years in prison.

Weapons offences deemed to be minor, however, may result in fines or a maximum of six months in prison.

“It doesn’t help to stop and bother people who walk around with weapons of there isn’t a severe punishment,” J-B Cederholm with the county police told the newspaper.

Cederholm added he is also concerned that guns are ending up in the hands of young people, explaining that even children have been caught roaming the streets with loaded weapons.