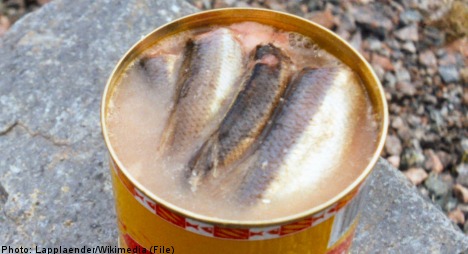 Made from the peculiar Swedish delicacysurströmming, the pills are said to protect against upset stomach, gastritis, and heartburn, according to manufacturer Rebiotica AB.

But the National Food Administration has cautioned that the supplement, sold by the name EpicAid, can cause health problems if taken in doses indicated as acceptable on the packaging.

According to tests carried out by the agency, the rotten fish pills contain unacceptably high levels of dioxins and PCBs, the Arbetarbladet newspaper reported.

According to the EpicAid bottle, the maximum recommended daily does is 20 pills a day.

“If you eat as many as 20 pills a day you’ll end up with levels of dioxins and PCBs which are too high,” food agency health inspector Anders Jansson told the TT news agency.

The National Food Administration has now urged Sandviken municipality, where Rebiotica AB is based, to take action against the company.

But Rebiotica CEO Patrik Enfält was surprised by the agency’s findings.

“The expectations were that the pills would contain what the fermented herring contained. We haven’t added anything during production,” he told Arbetarbladet.

However Enfält refused to comment specifically on the Food Administration’s findings until he’d had a chance to review them himself.

The pills are said to be derived from freezedried surströmming from a Swedish salting house, which has no plans to stop production, but has urged Rebiotica to review the dosage recommendations and beef up its oversight of production, according to the food agency’s Jansson.

According to established National Food Administration guidelines, pregnant women should not eat regular or fermented herring more than two or three times per year.

The same applies to wild-caught salmon and trout from the Baltic Sea, as well as from Sweden’s Lake Vänern and Lake Vättern, as fish from those waters can contain high levels of dioxin and PCB, both of which can have toxic effects.

The agency has now given Sandvik municipality until December 15th to report back with a plan of action for addressing the matter.