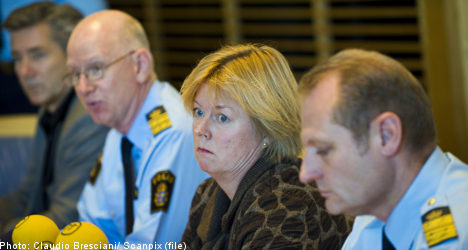 He faces charges for one murder and seven attempted murders. The suspect was charged in absentia in the afternoon and arrested at 6.30pm on Saturday. The man has denied the crimes, according to chief prosecutor Solveig Wollstad.

“It was at 6.30pm in the evening it began. I saw many police with helmets and shields sneaking around. However, they were very discreet,” an eyewitness at the arrest near central Malmö told news agency TT on Sunday.

“Everything proceeded calmly and there was no uproar. The police appeared to have a good grip on the situation,” the witness added.

Police technicians were also on site.

“They took away many cardboard boxes, bags and other things. It was all over at 8pm,” the witness said.

Of the 50 to 60 shootings that have taken place in Malmö last year, police consider about 15 of them as “unaccounted.”

One woman was shot to death near Västra Skrävlinge church, while eight others were injured.

Trez Persson, 20, was killed last October when someone fired numerous shots into the car she was sitting in with a friend, a man of immigrant origin, who was seriously injured in the attack. She was the only one who did not have an immigrant background.

At several of the shootings, including the murder, a single large-calibre weapon was used.

Intense media interest greeted the police press conference that began at 1pm on Sunday that was broadcast on public television. Eight to 10 television crews were on site, as well as about 20 journalists, including those representing Danish media.

Wollstad confirmed that she charged a 38-year-old man in absentia on Saturday. After preliminary questioning, police decided to proceed with an arrest in connection with the murder in Malmö in October 2009 and seven attempted murders from October 10th, 2009 to last month.

In October alone, numerous shootings appear linked to the case, including two men shot in the back a week apart as they waited alone in the dark at separate isolated bus stops.

“By noon on Tuesday, I will take a position on whether to demand custody for the man,” said Wollstad.

She added that police have made certain findings that strengthen suspicion against him and that further interrogation questioning is ongoing.

What led to suspicion against the man was simply traditional police work, according to Skåne county criminal investigation department superintendent Börje Sjöholm.

“Tips from the public helped spark interest in him,” he explained.

Malmö police stopped short of calling the arrest a complete success. The following weeks and perhaps months will be filled with intensive police work.

In addition, the man is only suspected in seven of the nearly 20 shootings that police believe they have no other obvious explanation.

The suspect has only been heard once, on Saturday evening, when he denied the crimes.

The man has a license for two weapons that were found during a home raid.

“The weapons are being examined by the National Laboratory of Forensic Science [Statens kriminaltekniska laboratorium]”, said Sjöholm.

When asked why the man had a weapons permit, Sjöholm responded, “I do not want to answer about that. In this case, I do not help to contribute to unmasking the man’s identity.”

Police work is now intensively focussed on questioning, according to Sjöholm.

“This case is far from solved, but the work on the investigation has just begun,” he said.

The police also pointed out that they have continued with preventative work in Malmö through increased visibility.

During the press conference, the police detailed the circumstances behind the arrest at his home on Korsörvägen.

“It proceeded calmly. He was arrested in his home. The man has a Swedish background,” said Sjöholm.

Police added he was not previously known to police, but as Dag Andersson of the National Murder Commission pointed out, “At least he is not in our records over the last five years.”

The police and Wollstad did not disclose any details about the man’s possible motives behind the shootings, saying he is under suspicion for probable cause.

“I believe that it is probable cause, which strengthens the suspicion,” said Wollstad.

The suspect may even have committed unsolved murders dating as far back as 2003.

The announcement has spread panic in the city and the incidents bear a chilling similarity to the case of an immigrant-shooting sniper in Stockholm in the early 1990s nicknamed “Laser Man.”

Police also declined to comment on whether fortified police watches suggested that more offenders are under suspicion.

“It is probably a foregone conclusion,” said Sjöholm.

The extra security measures include an increased police presence on the streets. When asked whether people of foreign backgrounds are now safe on Malmö’s streets, Malmö city police chief Ulf Sempert replied, “We think that it has been so the whole time.”

Wollstad did not disclose the suspect’s name and refrained from officially linking him to the man Swedish press have dubbed “the new Laser Man.”