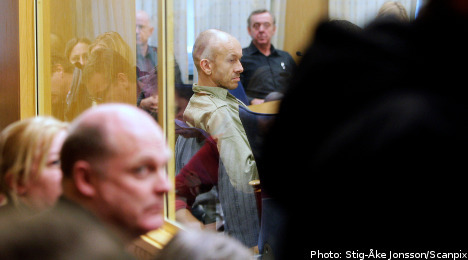 The man, named as Peter Mangs by the Expressen daily on Tuesday, is suspected of murder and five cases of attempted murder. He denied all charges in the hearing at lunchtime on Tuesday.

There was massive interest in the case at the court, with up to 70 people attending the hearing which was held in the court’s security chamber, including journalists from Denmark, Norway and Finland.

Mangs was driven by car to the hearing with a street behind the court cordoned off and a large number of police officers in attendance.

The prosecutor asked for non-disclosure, which is a more stringent restriction than confidentiality of investigations and meaning that details of court proceedings may not be revealed.

The court ruled that Mangs should be remanded into custody on probable cause – the highest level of suspicion under Swedish police guidelines.

According to Expressen, police have concluded after tests that at least one of the weapons licensed to Mangs matches bullet fragments found at one or more of the shootings of which he is suspected.

Prosecutor Solveig Wollstad confirmed at a press conference on Tuesday afternoon that suspicions against the man had strengthened and that he remains suspected for a further two attempted murders which were not addressed in the remand hearing.

Wollstad added that she was required to bring charges before November 23rd, but added that this would not happen and that an extension of the remand ruling would be sought.

Peter Mangs was arrested on Saturday after a tip from a member of the public. Police have confirmed only his age, that he “has a Swedish background” and that he does not have any previous criminal convictions.

A possible motive for the attacks has not been released by the police, but Mangs’ father was quoted by the Aftonbladet daily on Monday as saying that his son “lived in fear of immigrants taking over Swedish society.”

Police are working on up to 20 unsolved shootings that they believe may have been deliberately targeting people with immigrant backgrounds in the city. The suspect has been remanded in connection with six of the cases.

Malmö police have issued calls to the public to assist with information pertaining to the case.

The announcement spread panic in the city and a connection was quickly established with the case of an immigrant-shooting sniper in Stockholm in the early 1990s nicknamed “Laser Man.”