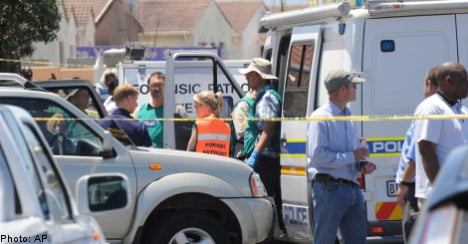 Twenty-eight-year old Anni Dewani, a native of Mariestad in central Sweden, was killed on Saturday evening outside of Cape Town after the taxi she was riding in with her 31-year-old British husband Shrien was carjacked.

“I can now confirm that a 26-year-old male was arrested in Khayelitsha in the early hours of this morning, thanks largely to cooperation from the community,” Western Cape community safety minister Albert Fritz said in a statement, according to South African news website Mail & Guardian Online.

“The investigation continues and I urge police to collect and use all available evidence so that we ultimately secure a conviction.”

Earlier in the day, police said they had brought in the 26-year-old man for questioning.

Anni Dewani was found shot to death in the abandoned taxi which she and her husband had taken following a Saturday evening dinner.

The couple had been married in India just over two weeks ago and decided to venture outside of Cape Town’s tourist district so they could see “the real Africa,” Shrien Dewani told The Daily Mail.

“Anni grew up in Sweden and she felt as if the area around this hotel was just like at home: so clean and safe and maybe a bit sterile,” he told the newspaper.

“She had never been to Africa before, so she suggested that we should have a look at the ‘real Africa.'”

Dewani added he felt “powerless” to help his bride and he carries “an enormous amount of guilt” about the carjacking, which took place as they traveled through Guguletu, a township about 15 kilometres outside of Cape Town.

“The men kept on saying, ‘We are not going to hurt you. We just want the car.’ That was a lie,” he continued.

Minutes later, he was thrown out of the vehicle.

Dewani eventually made his way to a police station and alerted officers that his wife had been kidnapped.

Local officials theorised that the cab driver may have taken a wrong turn as the newlyweds searched for a local restaurant recommended by television chef Jaime Oliver, according to several media reports.

Safety minister Fritz was also frank about the dangers of traveling to the area where the carjacking took place.

“To be in a township at that time of night is very dangerous. It’s something I would never do,” she told the Daily Mirror newspaper.

Anni Dewani’s murder is expected to undo some of the success of the World Cup in promoting South Africa as a safe tourist destination and could damage the world’s perception of South Africa, industry insiders said on Tuesday.

“We hosted an incident-free World Cup and are now facing the very real risk that tragic incidents like this will negate our hard-won positive reputation and create another spiral of Afro-pessimism,” Cape Town development and tourism official Felicity Purchase told AFP.

“There is no doubt from a tourist perspective that it will have a negative -impact, especially with all the media attention,” said Johan Burger, a crime and justice specialist at the Institute for Security Studies.

South Africa has one of the highest murder rates in the world, with an average 46 homicides per day last year.

“In this case, the spontaneity of the couple’s decision and their unfamiliarity with the area put them at great risk.”