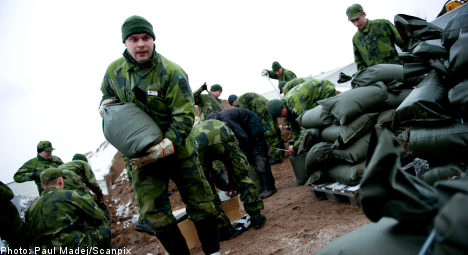 Sweden’s main meteorological agency, SMHI, noted that the winter continued its march south across the country as strong winds from the Baltic Sea brought heavy snowfalls in eastern areas of Svealand and Götaland.

The snow is expected to remain on the ground in many parts of southern Sweden as temperatures are set to remain well below zero.

“There has been a lot of snow overnight,” Lisa Frost at SMHI said.

Kalmar county was obliged to call for military help on Wednesday to aid in the battle against widespread flooding which had caused damage to property in the area.

The situation is reported to be most critical around Trekanten, around 10 kilometres west of Kalmar and the municipality has said all are welcome to help to build protective weirs.

“We hope that as many volunteers as possible can participate,” said Christian Karlberg at Kalmar municipality to the local P4 Kalmar radio station.

The strong winds caused traffic problems in some areas, with the bridge linking Öland with the mainland closed for a time on Tuesday after winds of more than 110 kilommetres per hour were recorded, with 42 millimeters of precipitation.

“When I made the decision to close the bridge wind speeds were up to 118 kilometres per hour,” said Reinhold Liljedahl of Kalmar county police.

School bus services were among those suffering disruption with cancellations in many parts of the county of Västergötland following heavy overnight snowfalls. School pupils in Skara, Lidköping, Essunga and Vara were among those affected.

In many areas of southern and central Sweden there were reports of traffic problems. While Stockholm roads were icy, only one accident was reported by the early hours of Wednesday as motorists heeded warnings.

The E4 motorway northbound in Hälsingland was closed for a time overnight after a truck skidded into a ditch near Gnarp. Traffic was diverted via a smaller road until the motorway could be cleared.

No one was injured in the accident and it remains unclear what caused it.

SMHI forecasted that more snow can be expected throughout Wednesday and Wednesday night in southern and eastern Götaland and eastern Svealand.

SMHI has cut its warning from class 2 to class 1 in many areas, which means that there are some risks for the general public and for interruptions to certain services.

The cold weather accompanied by snow falls is forecast to continue all week, with windy weather along the east coast.

SMHI defines winter as sub-zero median day temperatures and by this measure all areas south of Sundsvall, excepting the mountain areas, stand to experience an early wintry arrival.