The National Institute of Economic Research’s (Konjunkturinstitutet, KI) Economic Tendency Survey, which reveals the mood of the country regarding the economy, rose nearly four points to 114.1 this month from 110.3 in October, on a par with the record highs recorded in the autumn of 2000 and spring of 2007.

All sectors of the economy contributed to the indicator’s lift. However, the outlook of households remained bleak about the future.

The increase in the measurement was primarily due to solid gains for the indicator in building and construction activity, as well as the private service sector.

“The confidence indicators for the construction industry and the private service sector in particular rose considerably, 10 and 15 points respectively,” Roger Knudsen, head of the Business Tendency Survey division at KI, said in a statement on Thursday.

He added that the indicators for the manufacturing industry and the retail trade rose more moderately at three and two points respectively during the period.

Separately, the Consumer Confidence Indicator fell further in November, but only by a fraction of a point, meaning the indicator remains considerably above the historic average. The measure dropped to 22.6 from 23.4, slightly larger than expected, according to a Reuters poll, following a sharp decline in October.

The perception of Swedish households in November of their own finances was slightly more positive than the previous month, but in terms of expectations for the next year, the outlook has deteriorated.

Households estimated the variable mortgage rate estimated households would be 3.5 percent over the next year, compared with 3.4 percent in October.

As a result of several positive indicators in the Swedish economy, several economic observers are anticipating even higher GDP growth than earlier predictions.

Swedbank wrote in a monthly briefing that it has increased its latest forecast from the autumn. On Wednesday, SEB also increased its growth forecast to 5 percent this year.

According to Reuters on Thursday, KI director Mats Dillén said that growth this year is expected to reach closer to 5 percent. In its September forecast, KI predicted growth of 4.3 percent in 2010. 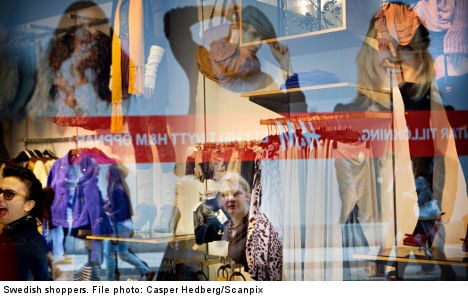 “The Economic Tendency Indicator dropped almost two points from 93.8 in April to 91.9 in May and indicates that growth in the Swedish economy is much weaker than normal,” the report from NIER (Konjunkturinstitutet) stated.

“The decrease was due primarily to falls in the confidence indicators for manufacturing and consumers…The (manufacturing) industry anticipates further reductions in the workforce.”

The tendency indicator is a method used to measure how people in different segments of the economy feel about the current climate. It is considered similar to the European Commission’s Economic Sentiment Indicator (ESI) and is “based on monthly surveys of households and firms and consequently captures the sentiment among these players in the Swedish economy”.

The index weights the different segments according to their importance to the national economy – industry 40 percent, the service sector at 30 percent, construction and retail both five each, while consumers make up 20 percent of the index rating system.

“The confidence indicator for the manufacturing industry fell six points from April to May and is now ten points below the historic average. New orders have generally been weak, and dissatisfaction with order books is considerably greater than normal,” the institute said in a statement.

While confidence in the construction and engineering fields went up compared to last month, the indicator was “still well below the historic average”.

While retail as a whole had dropped two points, there were variations in between sectors. Swedes were still buying enough food to keep grocers performing the best among their peers, while sales of cars provided less strong figures yet its representatives said they were expecting auto sales would pick up..

In the service industry, most sectors expected demand to climb in the new few months, with certain sector hoping to employ more people – primarily restaurants, technical consultants and architects.