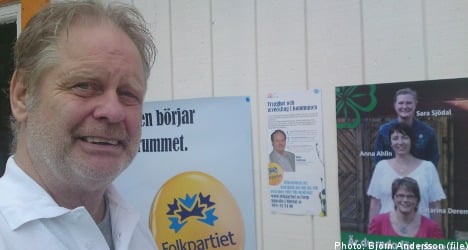 Andersson received a letter informing him he had been elected as a representative on the local council in Tierp in eastern Sweden, the local Arbetarbladet newspaper reports.

Since he isn’t politically active, Andersson was confused by the letter, assuming there had been some mistake.

What he didn’t realise was that there was another Björn Andersson in the area who was an active member of the Liberal Party (Folkpartiet) and who had run for a seat on the council in Sweden’s recent general elections.

Ever since election day more than two months ago, Liberal Party member Björn Andersson had assumed he had won a seat on the council.

However, according to the letter of the law, the apolitical Björn Andersson actually holds the seat.

“I found out about it yesterday when a reporter called me and told me about it,” the politically active Björn Andersson told The Local.

According to him, the mix-up likely occurred well before the election when the party filed papers for his candidacy.

Andersson noticed that one of the forms stated he was 66 years old when he is 64 years old.

“I thought it was simply a typo,” he said, adding he alerted party officials about the mistake and didn’t think much of it.

But the error was actually a consequence of the wrong personal identification number (personnummer) being included in the papers filed by the Liberal Party.

As it turned out, the error resulted in keeping the Liberal Party’s Björn Andersson off the ballot, replacing him with that of the other Björn Andersson.

The unintentional candidate, an engineer in the manufacturing industry, told Arbetarbladet that he had no intentions of trying to retain the seat despite his right to do so.

“It was a quick decision. Politics is too tedious,” he said.

“I’m not politically active at all. But the Liberal Party probably needs to do a better job of keeping track of its candidates.”

The Liberal Party’s Björn Andersson explained that mistakes can occur in the frenzied work ahead of an election.

“There is so much work involved with preparing for the elections, everyone in the party is working hard, so it’s not surprising that someone can make a mistake. I think you have to attribute it to simple human error,” he said.

And while he finds the whole incident “sort of funny,” the politician said that his relaxed attitude has much to do with his doppelgänger’s lack of interest in politics.

“It’s easy to laugh at it, but at the same time, if he had wanted to keep the seat, that would be quite serious,” said Andersson, adding that Swedes perhaps “take it for granted” that such mistakes can’t occur.

“It’s frightening, really. You assume that society has controls in place so things like this can’t happen.”

While he’s relieved that the “wrong” Björn Andersson is willing to give up the seat, the ‘right’ Björn Andersson still isn’t sure about what bureaucratic steps must take place to enact the change.

“He has been formally elected, so I’m not sure how they’re going to fix it,” he said.

County election official Arne Åhman told Arbetarbladet that the county governing board will look into how to correct the mistake, adding that he is certain that voters had in fact thought they were casting a ballot for the Liberal Party politician, rather than a local manufacturing engineer.

While he admitted that the error managed to slip through all the normal controls, he emphasised that the party was to blame.

“Here someone has taken information from the population registry and ended up with another Björn Andersson with a similar personal identity number,” he told the newspaper.