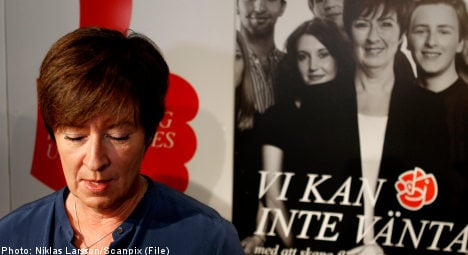 For Matthias Hjertzell, a shy, polite 19 year old, the 2010 general election was memorable not just for the headlines it made in national papers. The showdown between the Social Democrats and the Moderates, leaders of the ruling centre-right bloc, marked the first time Hjertzell has ever cast a ballot.

A member of the Swedish electricians’ union, Hjertzell might once have been considered a safe vote for the Social Democrats, who have always counted organised labourers among their most reliable supporters. Not this time.

“I voted for the Moderate party,” says Hjertzell.

“If you have a job, they are a good party for you.”

The Social Democratic Party, long considered one of the most powerful political machines in Europe, posted the worst performance in its history in the last election, taking just 31 per cent of the vote. Behind the party’s defeat is not just a failure to woo the burgeoning middle class, analysts say, but also a steady slide in support from those who once formed the unshakeable backbone of the party: traditional workers.

As the Social Democrats scramble to fill the leadership vacuum in the wake of Mona Sahlin’s resignation, observers say the party faces a tough battle to shore up its eroding support base.

Support from members of the LO, the largest organization representing Swedish trade union workers, has steadily declined, with just over 50 per cent of members voting for the Social Democrats in 2006, down from 58 per cent in 2002, according to the Swedish National Election Studies Program at the University of Gothenburg. And exit polls, while preliminary, suggest little if any ground was won back at the ballot boxes this year.

It is a troubling reversal of fortune for the Social Democrats, the architects of the cradle to grave welfare state, whose political ideals and history are rooted in a historically powerful connection to unions and ordinary wage earners.

“Traditionally, the Social Democrats always stood for the right of work, but also the duty of work,” says Maria Oskarson, lecturer in the political science department at the University of Gothenburg.

“They stood for the morality, the value of putting your straw to the stack so to speak. They lost this in the last election.”

Meanwhile, Fredrik Reinfeldt’s centre-right Moderate party has picked up the mantle of the “workers party” by offering tax cuts and other incentives to ordinary wage earners, Oskarson said. In the process, the Moderates have recast the Social Democrats, the architects of the Swedish welfare state, as the “party of the unemployed,” she said.

It all adds up to a fundamental shift for a country where the possibility of tax cuts was once viewed as a threat to the welfare state.

“The Moderates were very successful at casting (the Social Democrats) as the party for the unemployed and sick.

“By doing this they created a division between the workers and the ‘freeloaders’ so to speak, which really didn’t exist in Sweden before.”

The LO in particular maintain a close relationship to the Social Democrats, contributing funds to their campaigns and exercising a powerful voice within the party, explains Christer Thörnqvist, a professor of labour science at Gothenburg University.

But unions have their own battles to fight. As in most industrial democracies, employment in Sweden has gradually shifted from traditional manufacturing industries to the services sector, where union membership is lower. Currently about 70 per cent of the Swedish workforce is employed in the service sector and only about 30 per cent in manufacturing. In the 1960s, when manufacturing drove the economy, those figures could have been reversed, says Thörnqvist.

The LO alone has seen its membership slide from two million members in 2000 to about 1.6 million members today. Though that decline can partly be blamed on rationalisation in industry, the most devastating membership losses came after the centre-right Alliance increased premiums for the unemployment insurance funds administered by trade unions said Thörnqvist. An individual member’s fee increased from between 90 and 100 kronor ($12.50 to $14) a month to as much as 370 kronor ($52) a month.

Many members began to see unemployment insurance and union membership as “as two sides of the same coin, now a coin they could no longer afford,” says Thörnqvist.

Indeed, in 2007, overall union membership fell from 77 to 72 per cent, the biggest loss in a single year since the General Strike in 1909.

But the Social Democrats’ problems also stem from a failure to respond to broader shifts in Swedish society, said Jenny Madestam, a lecturer in political science at Stockholm University.

“The Social Democrats can’t attract traditional workers anymore and part of that is that being a worker isn’t the same as it was 30 years ago,” she says.

“You can have a house and a relatively high income. Your concerns are different.”

Madestam points to the RUT, the tax deduction for services in the home, as a policy that appealed to traditional workers as well as the middle classes.

“It was a very popular policy especially among families where both partners work and may need help with babysitting and housekeeping, but the Social Democrats opposed it,” she explains.

Johan Hall, a press secretary for the LO, noted that the tax cuts imposed by the Alliance made many workers “felt like they earned more” under the Moderates, even if their costs increased in other areas (such as unemployment insurance).

At the same time, the Moderates were careful to appear as guardians of the cherished welfare state at the same time as they imposed income tax cuts that might once have been viewed as a potentially damaging to the traditional social model. The approach won the Moderates the kind of broad appeal among middle and working classes that the Social Democrats once enjoyed.

“This is why they worked out the idea of the welfare state, the idea that if everyone pays tax, everyone benefits. They managed to become the party that appeals to everyone. The funny thing is that today the Moderates are the party that has managed to attract the most people across classes.

This is a problem, a big problem for the Social Democrats.”

Yet as traditional allegiances weaken, the Social Democrats have failed to reach new supporters, including immigrant groups. Immigrants now account for 14 per cent of the Swedish population and employment rates for this group tend to be significantly lower, as is participation in elections.

“The working class in terms of those born in Sweden is diminishing, partly because they became educated and vaguely middle class,” explains Olof Ruin, professor emeritus of political science at Stockholm University.

“At the same time you have more and more people coming from outside Sweden and they have more trouble finding jobs. These people are less active in politics, they may not choose to vote or may not qualify to vote. “

The question of how the Social Democrats will shore up support has been temporarily sidelined by debate over who will take the reins from Mona Sahlin. Once that issue is put to rest, observers agree the party must find a new niche for itself in a rapidly changing Swedish society.

“We used to speak of the social democratic hegemony,” says Madestam.

“We are all social democratic at the base whether we vote for the Left Party or the Centre and our ideas about social justice and equality are the same thing. But Sweden has become more and more individualistic. People are thinking more about what they want for themselves. Ideas about equality and solidarity are not so strong.”