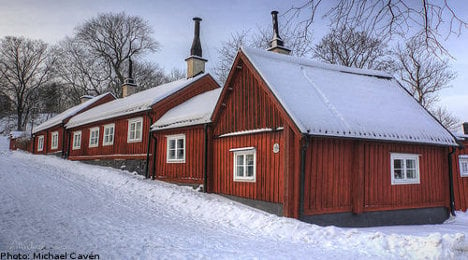 Temperatures across the country are expected to drop to record lows for the first week of December, with the exception of the far north, with averages coming in 7-10 degrees Celsius below normal.

Stockholm registered -11 degrees Celsius at the weekend, the coldest November temperature since 1965 and the mercury is set to plunge further on Wednesday and Thursday, dropping as low as -15.

“It is far below average temperatures, which usually oscillate around zero at this time of the year,” said Alexandra Ohlsson, a meteorologist with SMHI.

Dalarna and Jämtland in northern Sweden will also be hit with the harsh weather. The Storsjön lake in the heart of Jämtland’s main city Östersund has already frozen over in most parts.

SMHI forecasted that in southern and central areas the cold will ease off somewhat come Friday. Northern Norrland will however drop to minus 14-17 degrees Celsius in the middle of the day.

The sub-zero temperatures are here to stay though, even in the south, Alexandra Ohlsson said.

“It looks like the sub-zero temperatures will persist,” she said.

With more snow on the way in from the Baltic Sea, the current high snow depth of eight decimetres, recorded in Tidaholm in western Sweden, is set to be exceeded.

Habo and Mullsjö are some of the most wintry white municipalities in southern and central Sweden, and warnings have been issued over the dangers associated with heavy snowfalls.

Emergency services in Jönköping county in central Sweden are urging people to check their roofs, especially split-level houses where deep pockets of heavy snow can form.

SMHI was reluctant to issue a forecast for Christmas and on whether the temperatures will remain low enough to keep away the slush that typifies the festive season in many parts of southern and central Sweden.