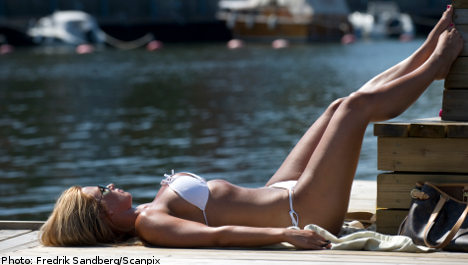 “Our studies show that women with active sunbathing habits live longer,” said chief physician Håkan Olsson at the division of oncology at Lund University, to the local Göteborgs-Posten (GP) daily.

Studies of the sun exposure habits of 40,000 women in southern Sweden have found that the health benefits of spending extended periods in the sun outweigh the negatives, such as the increased risk for skin cancer.

Olsson argued that he was not alone in claiming “that there can be other factors other than the sun which affect the risks for developing malignant melanomas”, and that exposure to the sun could help protect against a slew of other conditions.

Researchers claim that exposure to the sun is attributed to helping against blood clots, which are twice as common in the darker periods of the year than in the summer, the newspaper reported.

Furthermore the incidence of type 2 diabetes also shows seasonal variations, with the winter boom in cases attributed to a lack of vitamin D.

Skin cancer is however an increasing problem in Sweden, including the occurrence of dangerous malignant melanomas and the role of vitamin D is becoming an increasing popular cancer research area as scientific evidence mounts of its positive health benefits.

While doctors agree that avoiding sunburn and exercising caution in the sun is important, there is some dissent over blanket recommendations against solariums, protective clothing and comprehensive use of sunscreen, GP reported.

“We know that we are inside much more than before – this is certainly a factor to the declining levels of vitamin D,” Håkan Olsson told the newspaper.