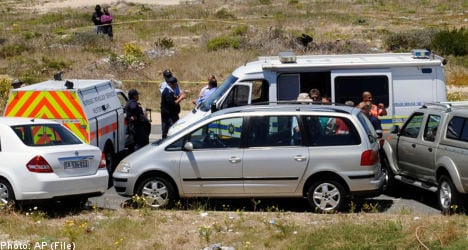 Anni Dewani, a 28-year-old native of Mariestad in central Sweden, was shot dead after the taxi in which she was travelling with her husband Shrien Dewani, was hijacked on the outskirts of Cape Town on November 13, just weeks after their marriage.

Her body was later found in an impoverished township neighbourhood.

Dewani, who returned to Britain days after the incident in which he was unharmed, has denied any involvement.

Three men were originally charged with the murder but as part of a plea bargain the High Court in Cape Town heard one of the accused allege that the victim’s husband had ordered the killing.

A judicial spokesman refused to say if Dewani, who accompanied his wife’s body back to Britain, would be charged.

The claim that the husband plotted the murder was made by Zola Tongo, the driver of the taxi in which the couple had been travelling in Cape Town.

Tongo was sentenced to 18 years in jail on Tuesday after pleading guilty to murder and aggravated robbery.

National Prosecuting Authority spokesman Eric Ntabazalila told AFP that Tongo had given evidence that he was approached by the British businessman and promised 15,000 rand ($2,175) “to remove someone from the scene.”

He enlisted two accomplices to conduct the murder, according to Ntabazalila who would not discuss with reporters if the murdered bride’s husband would face charges.

“That is part of a different investigation. I cannot comment on that, police would have to to act on that,” Ntabazalila said.

Tongo’s plea bargain documents reveal that the hijacking was in fact part of a plan devised together with Dewani to conceal the murder.

“Threatening me and Shrien Dewani with a firearm was a mere pretence of force….” he said.

“The hijackers had thereafter driven off with the deceased and Shrien Dewani, with Shrien Dewani’s consent, in accordance with the pretence of force, and not in furtherance of kidnapping and robbing him.”

The two other men accused of Dewani’s killing are due to face trial on February 25.

Prior to the killing, the honeymooners had dined in a seaside restaurant in a town outside Cape Town and were on their way back to the city when Anni Dewani asked to see township nightlife, reports said.

The murdered bride was also robbed of a Giorgio Armani wristwatch, a white gold and diamond bracelet, a handbag and a Blackberry phone, according to the charge sheet.

Tongo told the court he carefully went through the hijacking and murder details with Dewani, even taking him to a blackmarket foreign exchange dealer in Cape Town to arrange payment and avoid a bank audit trail.

“The agreement was that after the hijacking of the vehicle, Shrien Dewani and I would be ejected from the vehicle unharmed…the deceased would be kidnapped and robbed, before she was murdered.”

Vinodkumar Hindocha, the father of the murdered bride had travelled from Sweden to attend the case. He said he was her next-of-kin as the couple had only been married in a traditional Hindu ceremony.

He fought back tears in the courtroom, according to South African media reports.

“We have been treated well and wish all involved to end this case. It is torture for us,” Hindocha said on the steps of the court, according to the Mail & Guardian news website.

Since returning to Britain, Shrien Dewani has enlisted the help of a renowned publicist, Max Clifford.