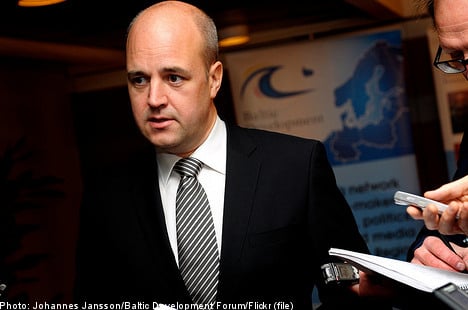 The Moderates polled a record level of 32.4 percent of support compared with the Social Democrats at 29 percent, Statistics Sweden announced in its Political Party Preference Survey November 2010 on Wednesday.

This is the first time the Moderates have outpaced the Social Democrats in party support in Statistics Sweden’s party preference surveys.

“This is big. This has never happened before in our measurements, which started in 1972,” said the bureau’s survey director Johan Eklund.

In addition, one in every four members of the Swedish Trade Union Confederation (Landsorganisationen i Sverige, LO), which boasts 2 million members and was founded by the Social Democrats in 1898, now supports the Moderates, according to the measurement.

The ruling Alliance parties would receive 49.3 percent support against the Red-Green parties, who polled 42.5 percent. Meanwhile, support for the Sweden Democrats increased slightly to 6.7 percent.

In the last year, the Social Democrats have lost support within the LO and in November, no longer held a majority in terms of support among members.

In the last year, support for the Social Democrats among LO members slipped 8 percentage points and now stands at 46.4 percent.

Meanwhile, support for the Moderates increased by 7 percentage points, with 25 percent of LO members standing behind the governing party.

However, among the Alliance parties, only the Moderates increased their level of support, advancing 2.3 percentage points.

The Social Democrats have support in nearly the entire country compared with the situation a year ago. An exception is in Stockholm municipality, where party support increased slightly to 23 percent from a previously extremely low level.

Even in the northern part of central Sweden, the party receives around 41 percent, but overall, the poll paints a bleak picture for the party.

The Social Democrats’ lowest levels of support are in the greater Stockholm, Malmö and Gothenburg regions, where the party only polled 20 to 23 percent.

Correspondingly, support for the Moderates has increased in almost all parts of the country, peaking at 47 percent in Stockholm county, which is unchanged from the previous measurement.

The Social Democrats’ all-time historical record high in this measurement was 50.8 percent polled in November 1993, while their lowest level of support was 29 percent.

The measurement is published in May and November every year. More than 9,000 respondents formed a part of the sample, of which Statistics Sweden managed to reach 6,200.