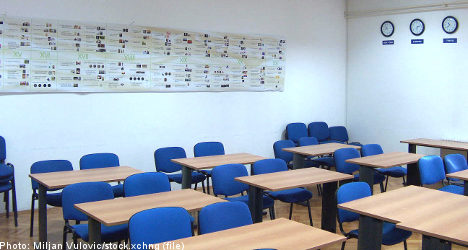 Among other statements, the teacher questioned the rights of immigrants to have children, according to a recording made by a student.

“The statement is shocking. I am glad that the principal and human resources manager acted forcefully,” said Landskrona children and youth committee chairwoman Lisa Flinth of the Liberal Party (Folkpartiet) to the TT news agency.

Educational broadcaster UR’s Skolfront programme reported that the teacher’s comment was not an isolated incident. According to a number of students, parents and former employees, several of the school’s staff members had made xenophobic remarks to their students.

The municipality has condemned the utterances, but has not commented on how the teacher managed to escape any disciplinary action by transferring to another school.

Flinth views the incident as strictly a staffing-related matter that she would not get involved in.

At a Friday press conference called by Landskrona municipality following the UR report, Thomas Johansson, director of administration for the children and education committee in Landskrona, said that he only arrived in Landskrona in September of last year.

In addition, he claimed that none of the principals who now work at the school in question in Landskrona had anything to do with the incident.

As a result, he declined to comment on the particular case exposed by Skolfront, but said that if any teacher would express such an opinion now, he could not see how it would be possible for the teacher to continue teaching in Landskrona.

When asked if he would notify the police if he learned of these types of opinions being expressed, Johansson said, “We always notify [the police] if staff or students commit crimes. Here in Landskrona, we have absolutely zero tolerance for any insults against the students.”

Regarding the news that the teacher in this case is still working in the municipality, Johansson said that it is impossible to take action against the teacher now for what may have happened two years ago.

The transfer was the result of a central bargaining agreement, he added.