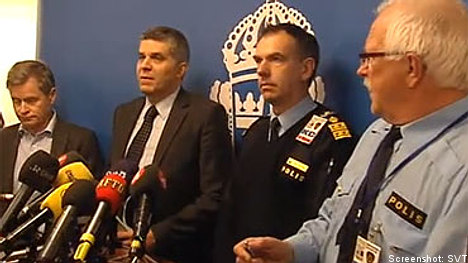 At a Sunday morning press conference, Säpo said it had taken over the investigation into the nearly simultaneous bombings from the Stockholm police. The investigation will be overseen by chief prosecutor Tomas Linstrand.

“We are opening an investigation into a terrorist crime under Swedish laws,” Anders Thornberg, head of Säpo’s security department, told a press conference, a day after the explosions targeted shoppers in the Swedish capital.

Thornberg called the incident “very serious”, although he reiterated that Säpo had no plans to raise the threat level in Sweden as a result of the attack.

“We’re now working to assess whether similar events might take place. We can’t rule it out,” he said.

He added there is “no connection” between Saturday’s attack and a bomb threat investigation Gothenburg from early November, a probe which was subsequently dropped without any charges being filed.

In the first blast, a car exploded, injuring two passers-by who were sent to hospital with minor injuries. Police say the vehicle was filled with cannisters of liquefied petroleum gas.

A second blast occurred just minutes later about 200 metres away, killing one man. An eye witness who arrived on the scene before police told the Dagens Nyheter (DN) newspaper it appeared something had exploded on the man’s abdomen.

On Sunday morning, Säpo maintained it was still “too early” to confirm whether the two blasts were related, however. The agency also refused to confirm reports that the man who died in the suicide bombing was the owner of the car destroyed in the first blast.

However, Thornberg admitted that it was one of the hypotheses Säpo is investigating.

“We can’t confirm anything yet,” he said.

A representative from the Stockholm police added that residents in the Swedish capital will likely notice an increased police presence in the coming days.

Shortly before the two explosions, which sent holiday shoppers scrambling in one of Stockholm’s busiest commercial districts, Säpo and the TT news agency received an email in which the author cites cartoons by Swedish Lars Vilks which portray the prophet Mohammed as a dog as well as the Swedish military presence in Afghanistan.

The message contained an audio files in which the sender said “now your children, daughters and sisters die like our brothers’ and sisters’ children die”.

Speaking on Sunday morning, Thornberg said it was still to early to confirm a connection between the blasts and the email, but that Säpo was investigating the matter.