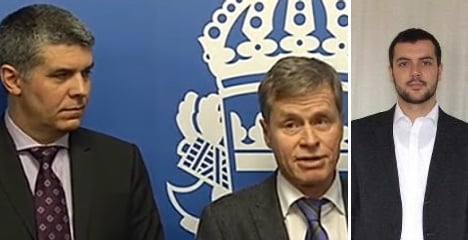 According to chief prosecutor Tomas Lindstrand, the suspected suicide bomber was “completely unknown” to Swedish intelligence officials prior to Saturday’s blasts.

He added that evidence gathered so far suggests the man acted on his own, but that the investigation into possible ties continues.

“As it looks now, he was alone in carrying out the act. But experience tells us that there are usually more people involved,” said Lindstrand.

While the suspect, identified in media reports and by an Islamist website as 29-year-old Taimour Abdulwahab, is “98 percent identified,” Lindstrand stopped short of making an official identification pending DNA analysis or an identification of the body by next of kin.

He added that while officials know the man was born in 1981 and gained Swedish citizenship in 1992, they remain uncertain of his country of birth, saying only it was “in the Middle East.”

Lindstrand also confirmed that Abdel Wahab owned the car which exploded on the corner of Drottninggatan and Olof Palmesgatan, injuring two people.

“Yes, it can be tied to him,” said Lindstrand, adding that the suspect had bought the car in November of this year.

The prosecutor described Abdel Wahab as “well equipped” with explosives, including a bomb belt and a backpack nail bomb.

“Where he was going, we don't know,” said Lindstrand, but added it was plausible to speculate he was heading “someplace with lots of people.”

The prosecutor confirmed as well that the threatening email received by the Swedish Security Agency (Säpo) and Swedish news agency TT just before the bombs exploded was sent by Abdel Wahab, explaining that it was sent from a “mobile phone or a mobile broadband device” from within Stockholm.

Shortly before the blast, Säpo and the TT news agency received an email containing audio files in Swedish, Arabic, and English which criticised Sweden for its military presence in Afghanistan and its acceptance of Swedish artist Lars Vilks, who sparked a backlash in the Muslim world in 2007 by portraying the prophet Mohammed as a dog in a cartoon.

The message warned that “now your children, daughters and sisters die like our brothers' and sisters' children die.”

Speaking at Monday's press conference, Anders Thornberg from Swedish security service Säpo said his colleagues are “working around the clock” to process tips from the public as well as information gleaned from interviews and other sources.

He added as well that “there is no reason to worry” that another attack on Swedish soil is imminent.

“When it comes to our threat assessment, we review things hour to hour. For the present, we will continue with the elevated threat level,” he said, referring to the threat level in place since October.

Earlier in the day, the Expressen newspaper reported that Swedish intelligence officials suspected Abdulwahab planned to set off bombs at three different locations in central Stockholm.

The backpack found near his body and filled with nails and screws was to be detonated remotely, the newspaper reported.

The final bomb was a belt made up of 12 gas canisters which officials believe was attached to Abdulwahab's stomach.

One theory being examined by investigators is that he was heading toward Stockholm's central train station and the Åhléns department store to set off two other blasts besides the car bomb, but that one of the explosive devices detonated ahead of schedule.

“In all likelihood, something happened or he made some mistake so that some of the explosives detonated,” Lindstrand told reporters.

According to Expressen, the explosion that killed Abdulwahab at the intersection of Bryggaregatan and Drottninggatan was caused by one of the 12 gas canisters attached to a belt around his body. The remaining canisters failed to detonate, however.

A mobile telephone was also found near the scene of the blast which killed Abdulwahab, leading intelligence officials to believe the three bombs were somehow connected and could have been detonated remotely.

Thornberg also labeled as a “rumour” a report from TT on Sunday night that a Swedish Armed Forces employee had warned an acquaintance hours before the twin blasts to “avoid Drottninggatan.”

“We have no idea about that. There is nothing that points to it [being true] other than what is in the media,” he told reporters, adding that officials continue to investigate the report.