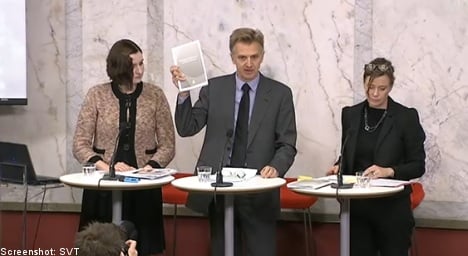 “For the moment, however, it encompasses relatively limited phenomena which can primarily be dealt with through preventative measures,” Säpo’s chief counterterrorism analyst Malena Remba told reporters during a Wednesday press conference presenting the report.

The report, which was commissioned in February, comes days after what Sweden’s democracy minister Birgitta Ohlsson decribed as the first-ever suicide bombing in Scandinavia.

Ohlsson emphasised that the terrorist attack which rattled central Stockholm on Saturday was an “unacceptable attack against our open democratic society,” but that Wednesday’s press conference had been planned since October and independently of the blasts.

According to the report, Säpo knows of around 200 Islamic extremists living in Sweden, 20 of whom became radicalised in the country in 2009.

Up to 80 percent of them are part of so-called “violence-prone networks,” while the remainder are “loners” and people with extremist contacts abroad.

“However, this is likely a low estimate, as we only included confirmed connections,” Rembe explained, adding that “it’s not one cohesive network,” but consists of individuals who have varying levels of contact.

The report also said that 20 people had travelled from Sweden to Somalia to train with Islamist movement Al-Shabaab, which has declared allegiance to Osama bin Laden’s Al-Qaeda network.

Several people, mostly from immigrant suburbs in the cities of Stockholm, Gothenburg and Malmö, travelled from Sweden to Iraq and Afghanistan to receive terrorist training, the report said.

The group of 200 individuals referenced in the report as being violent Islamic extremists is made up predominately of men, although a few women are also included.

The average age is 36 and the individuals come from 25 different countries, with Sweden being the third most common country of birth.

However, Säpo found no distinct patterns when it came to level of education, profession, or earnings.

Of the roughly 20 people who are thought by Säpo to have been radicalised in Sweden, most were born or raised in Sweden and can be found throughout the country, although are somewhat concentrated in and around large cities.

Rembe, who was joined by Säpo head Anders Danielsson, said that the Stockholm suicide bomber, strongly believed to have been Taimour Abdulwahab, was not among the 200 known violent Islamic extremists in Sweden.

Abdulwahab, who was known for his outspoken views in favour of violent jihad, was the only person killed when some of the explosives he was carrying detonated, but two others were injured when his car exploded nearby minutes earlier.

He was carrying a cocktail of explosives and is thought to have accidentally set off a small explosion near a crowded pedestrian street.

He killed himself before he could carry out what, according to the lead prosecutor on the case, appears to have been a mission to murder “as many people as possible.”

Media described him as an Iraqi-born Swede, although Säpo did not confirm his country of origin, only saying he was from the Middle East and became a Swedish citizen in 1992.

Separately, a Säpo spokeswoman told AFP late Tuesday that reports saying the investigation had so far not found any links between Abdulwahab and known extremist groups were true, but stressed the investigation was ongoing.

The Expressen daily said Wednesday a walkie-talkie radio had been found near the bomber’s body, suggesting Abdulwahab was working with accomplices.

Seven bomb experts from the US Federal Bureau of Investigation (FBI) arrived in Sweden to help with the probe conducted in cooperation with British police.

Despite Saturday’s suicide attack, Rembe reiterated that Säpo still had no plans to change its threat assessment.

“The events of December 11th show that there is a serious threat against people in Sweden. But there is still no threat against society’s underlying structures, Sweden’s form of government, or central leadership,” she explained.

In addition, the threat from violent Islamic extremism remains “limited,” with no signs indicating that more people will be radicalised in Sweden in the future.