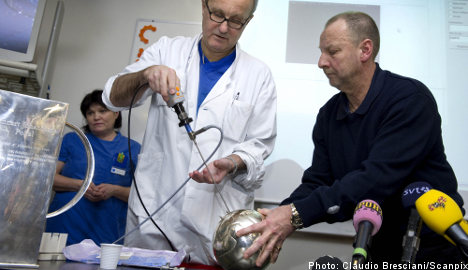 Dr. Magnus Forssblad’s surgical skills were enlisted to determine whether the reports that the message “Bajen forever” was inscribed in the ball on the top of the Lennart Johansson Cup were true.

On Friday, Dr. Forssblad opened the ball atop the trophy at the Arthro Clinic of Sophiahemmet Hospital, Sweden’s largest private hospital in northern Stockholm, to take a peek inside to confirm whether the rumours were true.

Indeed, he did discover a text inside the ball, but it was not at all the expected message.

“Djurgården is best,” the text stated, along with the names T. Henriksson, Anna, Ludvig and Leopold, the Swedish Football Association (Svenska Fotbollförbundet) revealed in a statement on Friday.

According to newspaper Dagens Nyheter (DN), Torbjörn Henriksson is an antique dealer, former Eklund customer and Djurgården fan. Eklund had asked Henriksson if he had wanted to engrave a message in the trophy, so he wrote the message and included his name, as well as his wife’s and their two sons.

“We are removing all of it. Lennart’s trophy will be entirely in his honour. The Lennart Johansson Cup is a tribute to Europe and Sweden’s greatest football manager. It will have a long life and should not be associated with any particular team,” the association’s communications director Jonas Nystedt said at the opening.

Dr. Forsblad, who was also served as Djurgården’s team doctor for many years, could not believe his eyes.

“As a former Djurgården team member, I can only laugh at this,” he told newspaper Expressen on Friday.

He added in DN that he thought he was hallucinating when he first saw the message.

A large media presence was in place when the trophy was opened and the procedure was broadcast live on the internet.

Johansson served as the president of UEFA from 1990 to 2007. The trophy has been awarded to the winners of the top-flight Allsvenskan football league since 2001 and was won this season by Malmö FF.