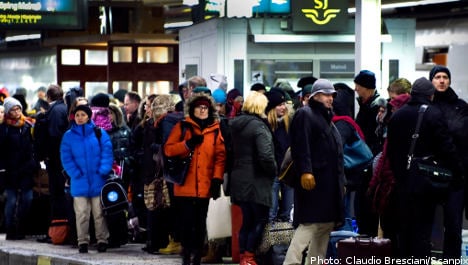 After a very cold night across the country, down to lows of -36 degrees Celsius in Idre in central Sweden, a new weather front carrying snow is on its way into northern Götaland and Hälsingland.

Swedish meteorological agency, SMHI, has issued a class 1 warning (of three on an ascending scale) for about a decimetre of snow in Hälsingland during the morning and around noon.

Air traffic to and from London is however set to resume to near-normal levels on Wednesday.

The situation in London remains chaotic however with SAS alone having around 6000 Swedes stranded there.

The airline is planning to switch to larger aircraft in order to get as many home in time for the holidays as possible.

“But it’s hard to sit and promise something, it becomes such a delicate situation when so many are affected. But now we are crossing our fingers because we really need to ease the pressure,” said Elisabeth Manzi.

“Of course, our goal is that everyone will get to celebrate Christmas at home. We are doing everything we can to get everyone home.”

SAS has called in extra staff to answer questions and take care of the re-booking for all those affected, but waiting times have been very long.

“We hope for understanding, but they (the passengers) have needed to equip themselves with a great deal of patience.”

In Paris, Amsterdam and Frankfurt the airlines have managed to service the stranded passengers, as traffic has largely been maintained, albeit with delays and cancellations.

in Sweden, the Transport Administration has put in extra resources to avoid a repeat of yesterday’s snow-related problems. The ambition is to keep long-distance trains rolling.

“What we now have is the aftermath of yesterday’s major problems with the switches,” said Tommy Andersson at national rail operator SJ’s press office.

“Some trains have ended up in the wrong place in the tumult, one can say.”

Some 20 trains in the Mälardalen region around Stockholm will be replaced by coaches and some passengers have been rescheduled to other departures.

“Otherwise it is all rolling on, generally it looks good,” Andersson said.