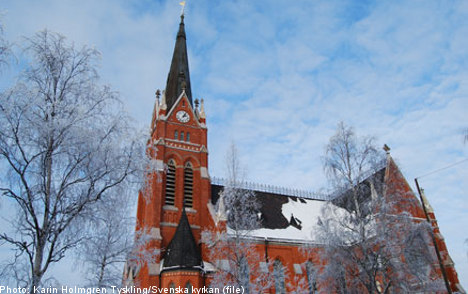 Those thronging the packed pews early on Saturday morning began to get restless after a while as it became apparent that something was amiss, the local Norrbottens Kuriren daily reported.

When it was confirmed that the duty pastor, Stefan Widman, had not awoken from his slumbers, the Christmas service was saved by the initiative of churchwardens Georg Johansson and Hans Brusevitz.

The pair read the Christmas gospel and the Lord’s Prayer and the organist Lena Stenlund ensured that the faithful were given a musical accompaniment to their song, the newspaper reported.

When the pastor did eventually make it to the church, after the guests had retired for coffee, he was deeply apologetic, but was met with laughter by forgiving parishioners.

“In the church hall, when i asked for forgiveness for the whole thing, I was told that it is human to oversleep. And I have rarely had such nice discussions with people,” Stefan Widman told Norrbottens Kuriren.

Widman, meanwhile, expressed concern that his tardiness would lead to congregation gossip.

“You become something of the ‘talk of the town,’ but that you have to take when you have been sloppy with your clock radio,” he said.