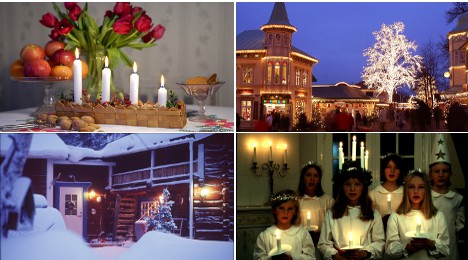 Candles appear in the windows of homes, shops, offices and cafes throughout

Sweden from the start of Advent, on the fourth Sunday before Christmas, to the

end of December, when dusk can start creeping over Stockholm as early as 2pm.

Most of the time, Swedes light up the traditional “Adventljusstake” — or Advent candlestick — a multiple-branch candelabra often in an inverted V shape and nowadays lit by electricity.

But star-shaped lanterns are also common, as are straight rows of four or seven electric candles.

Such ornaments are often left on all night and through the day.

Sweden’s Advent window-dressing comes from a mix of customs dating back to the 1800s, Lena Kättström Höök, a specialist in Swedish traditions and curator at Stockholm’s Nordiska Museet, told AFP.

“It started with families, became more and more popular year after year and spread to the workplace and so on,” said Kaettstroem Hoeoek, who in a book on

Two hundred years ago there was only one candle put in the window on Christmas Eve through to Christmas Day.

“It was a protection against evil forces, it had some kind of a magical explanation, and was also a salutations of sorts” for people going to mass, Kättström Höök said.

No one knows exactly how the tradition of lighting up windows for the entire month of Advent emerged, but star-shaped lanterns and electric candlesticks began to be common throughout December in the 1930s.

In 1937, an employee at the Philips factory in Gothenburg had the idea of putting together seven of the electric candle-shaped Christmas tree lights the factory made: the Adventljusstake was born.

“It was a big success! There was already the old traditions of having lights in windows, and this was safe against fire and could be left on all night,” Kättström Hoeoek said, explaining how adaptation enabled the old tradition to survive.

While the celebration of light in Sweden can be seen throughout December, it reaches a peak on the 13th, Saint Lucy’s Day, in a celebration that comes from a mixture of traditions from Italy, Germany and Sweden.

Back in the 1700s the day was marked by a young woman, wearing a long white dress and a crown of lit candles, bringing in treats in the early morning.

In the 1920s, the feast became modernised, with Lucy’s morning procession including other girls wearing crowns and “star boys” with pointy star-adorned

Today, every school and day care centre in Sweden hosts such a procession on December 13. Many children put on the long white dresses, but only one girl is picked to be Lucy.

Saint Lucy’s Day concerts are also held in churches throughout the country, with choirs of children holding candles.

The melodies sung can be traced back to Italy, but they were adapted with Swedish words that reflect the country’s climate in mid-December.

“The traditions, they are alive and they mix together and they travel and come back,” the expert explained.

“I think they picked me because I am tall and blond,” said 12-year-old Fanny Haeffner, who was this year’s Lucy for the three concerts her music school presented at Stockholm’s Cathedral.

“You always have a Lucy procession in school, but I never thought I would actually be her,” she told AFP, after an hour of standing still and smiling during the concert.

Nowadays battery-operated Lucy crowns are found, but for the concerts Fanny had the real deal: no fewer than seven candles burning on her head, ignoring safety concerns for a true tribute to light.

The Lucy does not sing, but the 179 other children, all holding candles in the dimly-light cathedral, concluded the concert with the well-known “Sankta Lucia” song.

“Saint Lucy, make our winter night light with your beauty .. light up your white light, Saint Lucy,” they sang, before simultaneously blowing out their candles.